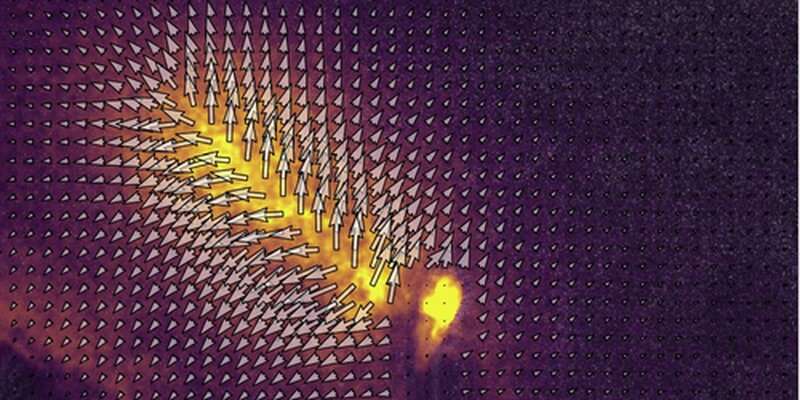 A team of researchers from PSL University, Harvard University and China University of Petroleum, has developed a way to visualize microscopic 3D displacements of moving objects or events over large areas. In their paper published in the journal Physical Review Letters, the group outlines their technique and suggest possible uses for it.

The typical way to capture the motion of a tiny moving particle is to take successive snapshots of it and then run them one after another like a video. One drawback to this approach is the loss of resolution when attempting to get a closer view of the action. In this new effort, the researchers have developed a way to get around this problem by capturing information regarding the speckling that occurs when an object moves. Speckling, in this scenario, refers to displacement of particles in the surrounding area.

The technique developed by the team involves firing a laser at a sample and then capturing the speckling that occurs as the light bounces off the moving particles around an object and then makes its way through a diaphragm and then on to a camera. To demonstrate their ideas, the researchers filled a small double-glass window with colloidal material. The colloidal material between the two panes of glass was then allowed to dry which made it harden. Next, the researchers injected air to create pressure in the hardened colloid. This resulted in the formation of cracks similar to those seen when mud puddles dry.

Prior research has shown that as cracks form in such materials, their actions impact one another—one crack may produce pressure, for example, pushing another crack to change its direction as it continues forming. Because these cracks are important in real-world applications, scientists and engineers would like to know more about the interactions that occur. To that end, the researchers fired a laser through the colloid at an angle, resulting in both scattered and backscattered light. To capture the resulting speckling, they placed diaphragms both in front of and behind the window with lenses just behind them. The light from the lenses then made its way to cameras situated on either side of the apparatus. By analyzing the light that made its way to the cameras, the researchers could capture the speckling, which revealed more about the interactions between the cracks as they were developing.

Camera able to capture imagery of an optical Mach cone

This document is subject to copyright. Apart from any fair dealing for the purpose of private study or research, no
part may be reproduced without the written permission. The content is provided for information purposes only.