WATERTOWN, Mass., April 22, 2013 — The photonic technology of thermal imaging was literally in the spotlight on the evening of April 19 as law enforcement officials used it to monitor and capture suspected Boston Marathon bomber Dzhokhar Tsarnaev.

On April 15, two bombs exploded in quick succession more than four hours into the marathon. Three people were killed and more than 140 were wounded. On April 19, Tsarnaev’s older brother, Tamerlan, also a suspect, was killed, and later that day, a massive manhunt for Dzhokhar shut down the city of Boston for the day.

A Massachusetts State Police helicopter equipped with a forward-looking
infrared camera “picked up the heat signature of the individual, even
though he was underneath what appeared to be the shrink-wrap, or cover,
on the boat itself,” state police officer Timothy Alben told reporters
shortly after the arrest. “The helicopter was able to direct the
tactical teams over to that area and, ultimately, take him into
custody.” 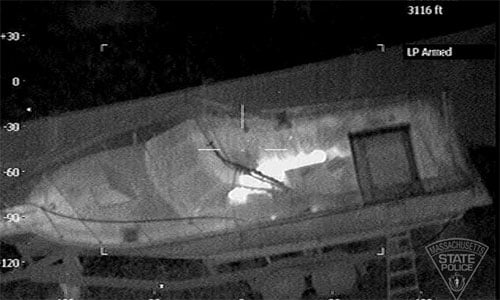 Of course, the use of thermal imagers on helicopters is not a new phenomenon, as no doubt plenty of marijuana growers can attest. Infrared imaging also is used routinely to detect heat loss in buildings to improve energy efficiency or by firefighters searching for people in thick smoke.

Optical imaging technologies enable the identification of suspects by their gait caught on camera and can calculate a suspect’s pulse to determine emotional state – a rising pulse rate indicates stress, as in anticipating a bold action.

Forensic teams in Boston might use optical techniques to check samples for explosives and other chemicals, whether at long distances or close up, said Christopher Carter, program manager at the Johns Hopkins University’s Applied Physics Lab in Laurel, Md. An example is Raman scattering, which provides a “fingerprint” of the molecules to be identified. 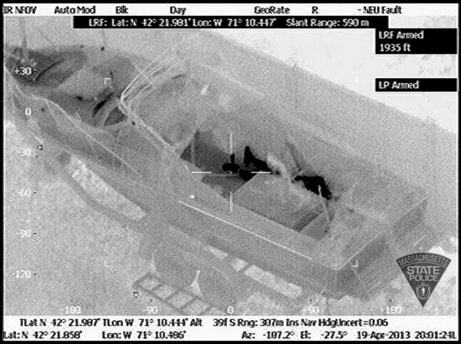 The feet of Boston Marathon bombing suspect Dzhokhar Tsarnaev are clearly visible in this infrared imaging shot from a Massachusetts State Police video.

“Raman spectroscopy is being used by both military and civilian agencies to identify bulk chemicals,” Carter said. “You’d use a laser to look at the Raman scattered light, from a few centimeters away, and detect precisely what is there. Other active optical techniques can identify explosives from up to 100 meters away.”

Carter will chair sessions on advances in spectroscopic chemical detection at the SPIE Defense, Security and Sensing (DSS) conference next week in Baltimore. His sessions are part of the conference on Chemical, Biological, Radiological, Nuclear and Explosives (CBRNE) Sensing.

But while photonics is improving law enforcement efforts to identify perpetrators of heinous acts, challenges remain in detecting signs of such attacks before they occur.

The biggest challenges in standoff detection are extending the distance range at which effective identification can occur, improving signal detection over atmospheric and environmental noise and interference, and screening multiple in-motion threats.

A number of research groups around the world are working to improve methods to identify explosives, biological agents or other threats from longer and longer distances. These methods include ultraviolet laser-induced fluorescence, Raman- and quantum cascade laser-based detection, and advances to standoff trace chemical sensing. (For more on this topic, see Advances in Standoff Detection Make the World Safer from the April 2013 issue of Photonics Spectra.)

Earlier this month, we reported on a time-of-flight imaging system that can now gather high-resolution 3-D information up to 1 km away from an object that typically is very difficult to image.

Physicists at Heriot-Watt University in Edinburgh, Scotland, created a system that sweeps a low-power infrared laser beam rapidly over an object, recording, pixel-by-pixel, the round-trip flight time of the photons in the beam as they bounce off the object and arrive back at the source. Their system resolves depth on the millimeter scale over long distances using a detector that “counts” individual photons. 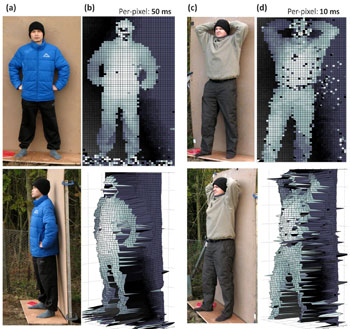 3-D images of two of the study’s authors from Heriot-Watt University, taken in daylight from 910 m away. Each standard photograph shows a close-up view of what the scanner sees. The middle-left panels show 3-D images with slightly less depth detail than the right-hand panels; this is because the detector spent more time collecting the returning photons for the images on the right than on the left. Courtesy of Optics Express.

Although other approaches have achieved exceptional depth resolution, the ability of the new system to image objects — such as clothing — that do not easily reflect laser pulses makes it useful for a wider range of field situations, said Dr. Aongus McCarthy, a research fellow at the university.

“Our approach gives a low-power route to the depth imaging of ordinary, small targets at very long range,” McCarthy said. Although it is possible for other depth-ranging techniques to match or outperform some characteristics of these measurements, “this single-photon-counting approach gives a unique trade-off between depth resolution, range, data-acquisition time and laser power levels.”

The primary use of the system will be scanning static man-made targets such as vehicles, the investigators say. With some modifications to the image-processing software, it also could determine a target’s speed and direction.

The research group of professor Manijeh Razeghi at Northwestern University’s McCormick School of Engineering and Applied Sciences is working on ways to improve standoff detection. In August 2012, we reported that her group had developed a resonator design that controls both wavelength and beam quality, enabling the purest, brightest and most powerful beams ever from a single-mode infrared quantum cascade laser. The work improves the beams’ accuracy, which is critical for boosting the standoff detection of gas, explosives or other hazardous materials to even greater distances. (See: Lasers for Standoff Sensing Improved)

Earlier this year, Razeghi’s group announced a new approach that integrates active and passive infrared imaging capabilities into a single chip for applications such as night-vision goggles and search-and-rescue operations. (See: Active and Passive Modes in One IR Camera)

I can see clearly now

As the dramatic nighttime shootout on April 18 with the Tsarnaev brothers demonstrated, it is critical for law enforcement officers to see in the dark as well as they possibly can to minimize threats. And not just at night, but also through smoke, fog, dust storms and other situations where visibility is poor. And to see clearly enough to determine whether someone is holding a bat or a rifle.

In his April 2013 Photonics Spectra feature, With Infrared, Military Owns More Than the Night, contributing editor Hank Hogan talks with Thomas Bowman, director of ground combat systems for the US Army’s Night Vision and Electronic Sensors Directorate, about how the military is trying to meet these goals — and to make systems less expensive, bulky, heavy and power-hungry — through sensor research and development.

Also included in the article are companies that make surveillance systems, such as Flir, HGH Infrared Systems, UTC Aerospace Systems and startup InView Technology, which is using a compressive sensing imaging approach developed at Rice University.

But it’s not always threats you need to see — there can be victims out there, too, who need rescue.

As we reported in February, researchers at Consiglio Nazionale delle Ricerche (CNR) in Rome used a lens-free technique to develop a system that can cope with the flood of radiation from an environment filled with flames and smoke. 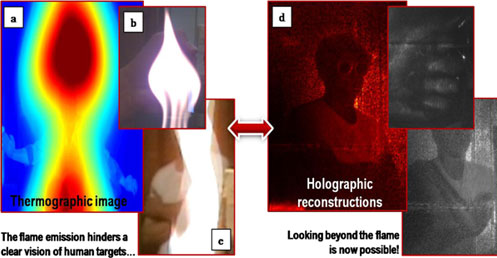 Two images of a human subject as seen through flames. When viewed in infrared or white light, the man is almost completely occluded (left). The new system reproduces the image behind the flames using holography, revealing a man wearing a T-shirt and glasses (right). Courtesy of Optics Express.

The result is an IR camera that does not…