As defined by the Mayo Clinic, “a concussion is a traumatic brain injury that alters the way your brain functions. Effects are usually temporary but can include headaches and problems with concentration, memory, balance and coordination.” Detecting a concussion is often challenging because of the scarcity of information on the injury mechanism. Symptoms do not always unfold immediately; rather, they may develop over hours, days, or weeks after the initial impact to the brain that caused the injury.

Further complicating concussion detection is that no certain force necessarily causes a concussion—a concussion could be caused by something as minor as heading a soccer ball (which is approximately 20Gs of force), or by a much stronger force of 300Gs (the standard that helmets protect against). A concussion could be caused by numerous weaker blows to the head, or one colossal hit to the head. How many concussions a person has suffered, along with their age—due in part to the incomplete brain formation of youths—can have serious long-term implications.

With all of the varying factors that can contribute to a concussion, the actual detection is incredibly difficult. The University of Pennsylvania looks to combat that with their latest invention—a material that changes color based on the force a helmet is impacted with. The addition of this polymer-based material to the helmets was inspired by early concussion detection.

It attempts to identify the concussion simultaneous with the actual occurrence. Although no hit necessarily will result in a concussion, the material would notify medical staff that the player is at risk by displaying the measurable impact reading on the helmet.

Shu Yang, the professor leading the research at the University of Pennsylvania in the Department of Materials Science and Engineering, directed researchers towards this potential early concussion warning system. Yang explained this invention: ”If the force was large enough, and you could see that as easy as reading a litmus test, then you could immediately seek medical attention.” In order to create this, Yang’s researchers collaborated with Villanova University’s researcher Gang Feng, and the group Jie Yin led from Temple University.

Previously, researchers have looked to helmet sensors to detect when a player receives a blow to the head, but those have not produced any tangible results to help further concussion detection. The National Football League, in conjunction with General Electric, also created the Head Health Challenge to fund companies working on concussion detection. But thus far, no invention is able to identify a concussive hit as it occurs.

Yang has experimented with holographic lithography, which uses lasers to pattern nanoscopic features into a three-dimensional material, to create photonics crystals. Holographic lithography allows Yang to carefully design the internal structures, which refract light to appear a certain color. That color can change though when crystal is deformed and the internal structure is re-arranged, which in turn makes the crystal appear a different color. A concussive force has the strength to deform those crystals.

For this specific innovation, a polymer was utilized to form the same internal structures of those of the photonic crystals. Once the polymer formed the intended structure, it was tested by being impacted with varying levels of force. The color change based on the force was then noted by researchers. The crystal structure of the polymer was permanently deformed from strong enough forces, which helps the process of recording the effects of the impact. 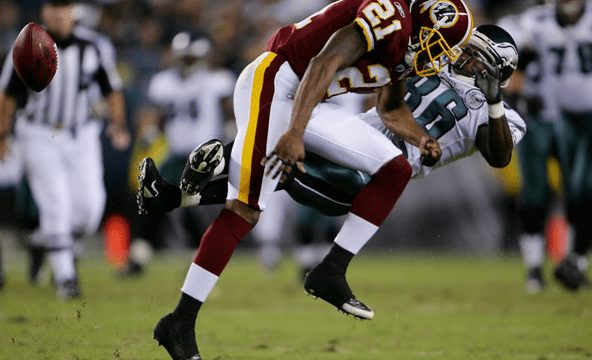 For the time being, the function of this polymer is to measure the force of impact that could be added to helmets. The polymer can be added without significantly changing the helmet due its light weight. The findings from their invention were published in the journal Advanced Functional Materials.

Although the University of Pennsylvania’s technology still requires further research in order to establish how it is predictive of injuries, it is a notable step forward. Concussion management has been a major issue throughout sports due to the long-term implications of traumatic brain injuries. While avoiding concussions as a whole is the safest way to avoid long-term consequences, it is not always practical in the military or contact sports. Therefore, finding a way to detect a concussion as early as possible to avoid re-aggravating the injury is crucial in concussion management.

Much of the focus of concussion management has been on tests that will allow medical professionals to diagnose the injuries as quickly as possible. The NFL and NHL have recently implemented concussion spotters in an attempt to identify players who may have suffered a concussion during a game.

However, researchers from the University of Pennsylvania are looking to transform concussion management by actually identifying a concussion as it occurs by measuring the force of each hit to the head of a player. Once researchers can understand how predictive impact force is of traumatic brain injuries, the polymer-based material could be applied to professional athlete’s helmets.

From that point on, it will be up to the leagues to enforce a system in which a player is removed from a game on the occasion that the polymer reads that a significant force has impacted it. The predictability of the material will be a crucial piece of this innovation, because without concrete evidence that a force of a certain reading will concuss a player, leagues could easily render this invention ineffective by creative lenient rules that allow players to remain in the games, since a high reading does not necessarily mean a player is concussed.

Until then, this remains one of many advances in the field of concussion management worth keeping track of.