Many so-called 3D display technologies rely on optical tricks, such as stereoscopy and reflective prisms, to give the illusion of depth. However, holograms can record, and display, all the information of the original light field using optical interference so that there is no visible difference between the optical information in the displayed image and the real-world scene. Hence the display is a true 3D view into the world (see Figure 1).1 Such an ideal 3D holographic display requires an array of multifunctional, highly dense pixels working in unison to encode phase, amplitude, wavelength, and polarization information yet with dimensions similar to visible wavelengths.1,2 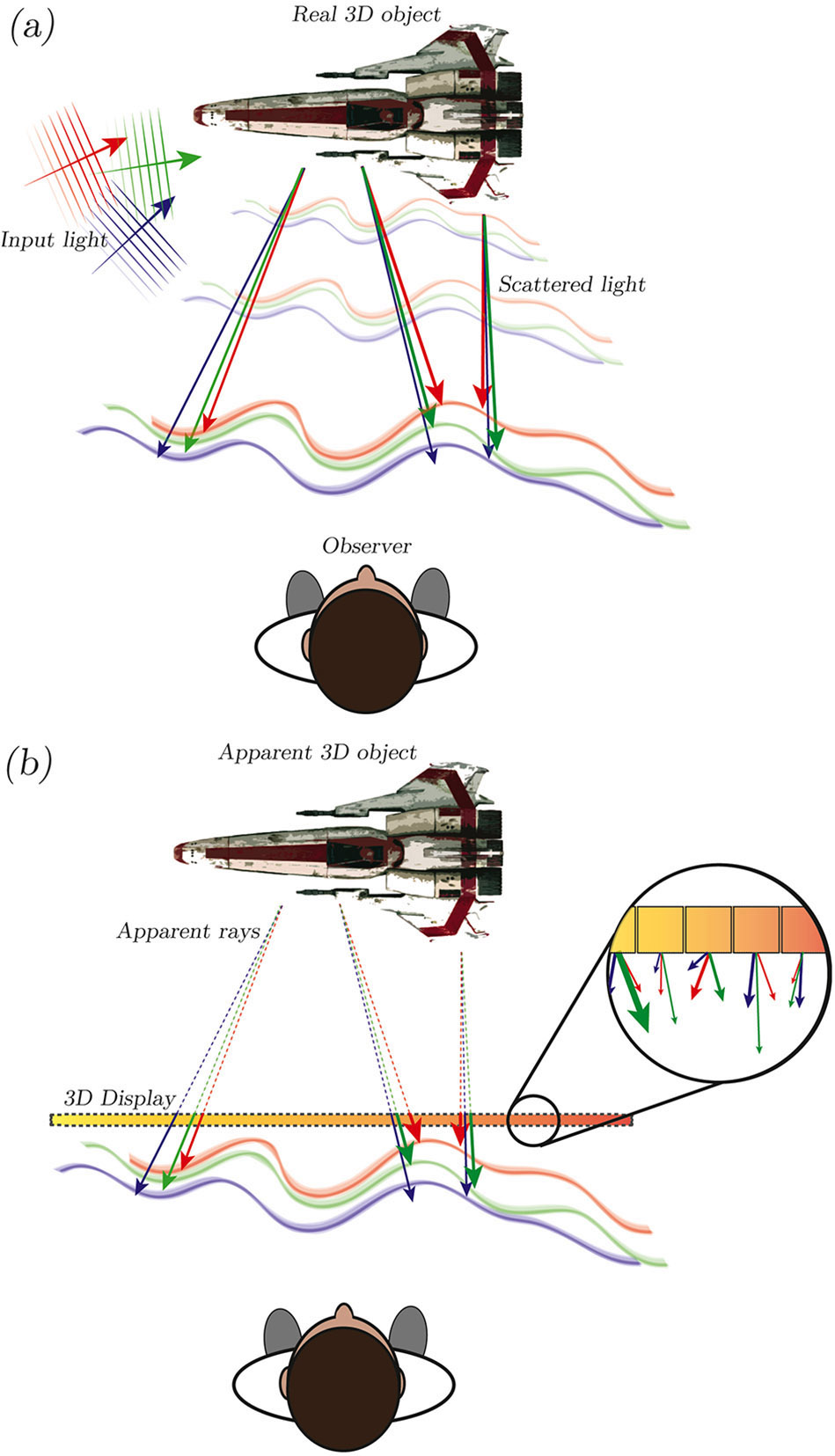 Figure 1. What does a true display mean? (a) The observer viewing a real 3D object. (b) 3D display whereby each pixel (in combination) can recreate the light field of the original 3D object.

Our recent work has focused on hardware. To produce dynamic pixel elements that are smaller and more functional, we have used plasmonic optical antennae on pixel backplanes. The combination of nanoscale confinement and the electric field of incident light driving the conduction electrons in these metallic nanostructures gives rise to a localized charge density oscillation, termed a localized surface plasmon resonance (LSPR). These metallic nanostructures act as antennae for visible light, thus allowing careful control of radiation at the nanoscale.3, 4

In a typical pixelated LCoS display, the backplane has no optical functionality other than reflecting incident light. We engineered pixel elements with optical antennae integrated with LCoS pixels to exploit this relatively large unused area. Our LCoS pixels have digital holograms patterned on their backplanes (using standard CMOS-compatible fabrication techniques), composed of optical antennae made from silver, which are sensitive to wavelength and polarization (see Figures 2 and 3).5When illuminated, the antennae, and thus holographic pixels, exhibit LSPRs at a specific wavelength. The re-radiated directional radiation from the other antennae interferes, producing specific outputs in the far field. However, when integrated with LC technology, we can electrically select which polarization and hence which hologram is excited. 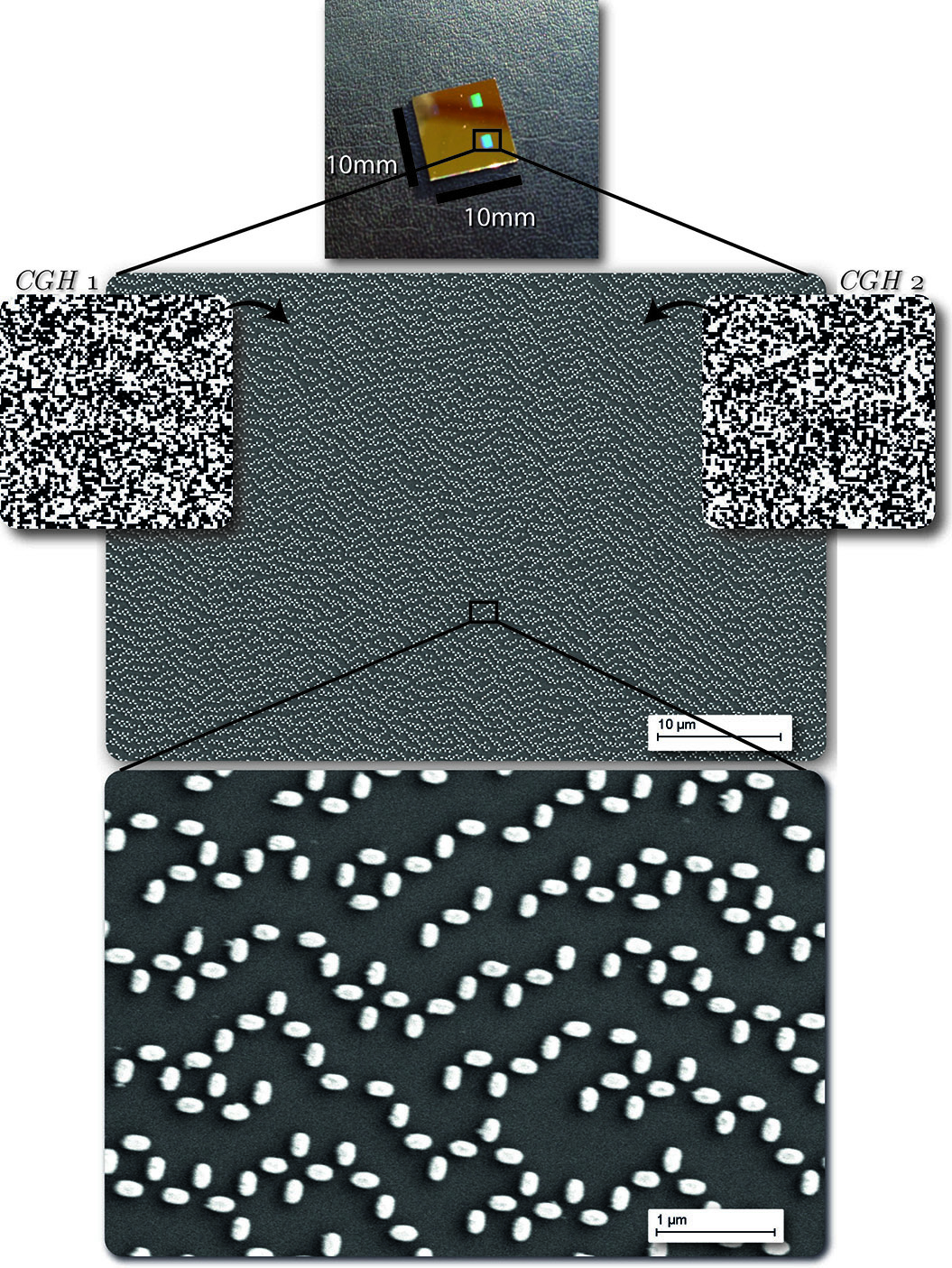 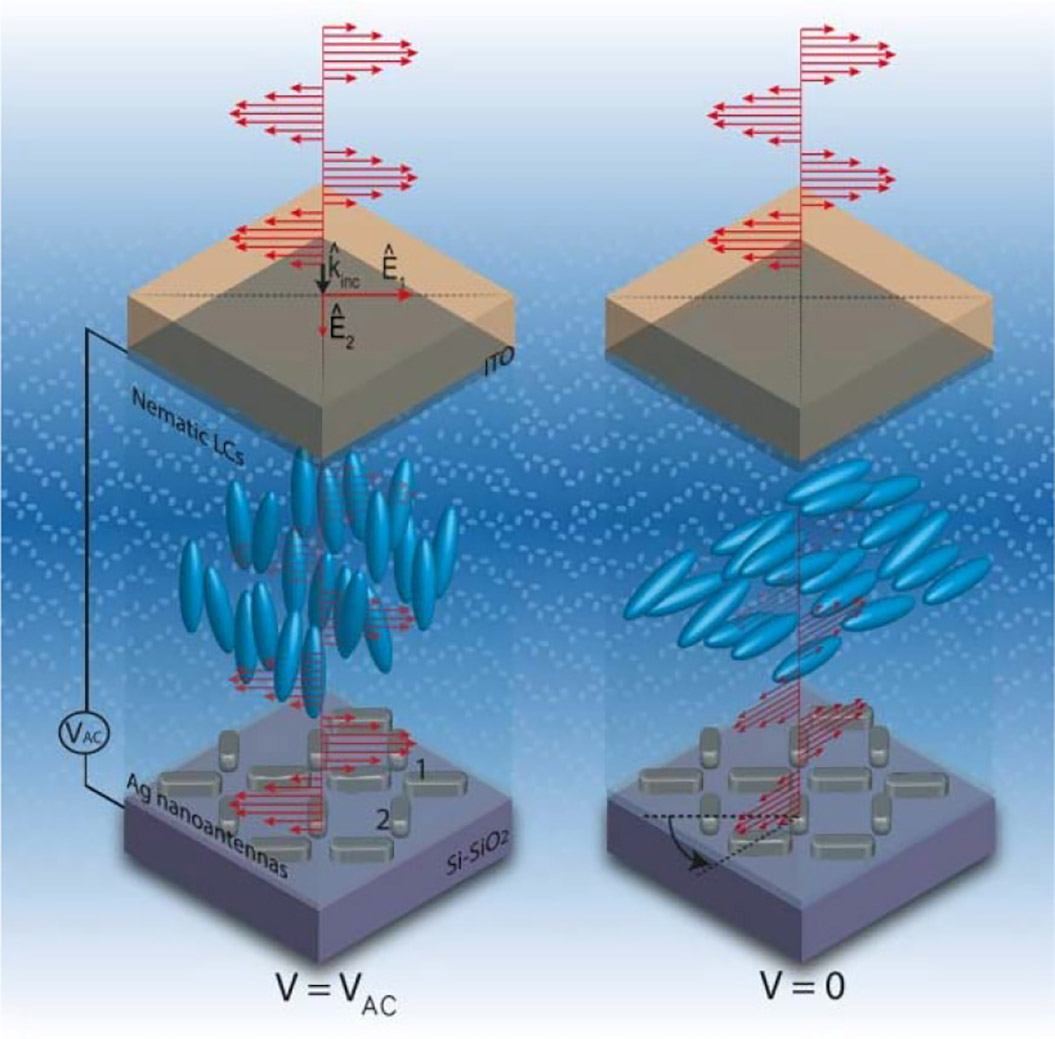 We have demonstrated that it is possible to access two independent holograms on a single pixel by applying a voltage across the cell and observing the far-field output on a diffuse screen (see Figure 4). Displaying an array of similar pixels on a conventional active matrix backplane would enable us to encode information (in the form of optical-antennae-based holograms), which can be selected as a result of the LC orientation. Thus, a single pixel for a holographic display could be composed of multiple pixel elements, where each element encodes additional holographic information. This unique design offers far greater control of the optical wavefront from a single pixel. Rather than just modulating levels of gray, we can now modulate wavelength and polarization levels. For the case at hand, we could include extra information about the optical wavefront in the display and access it electronically. 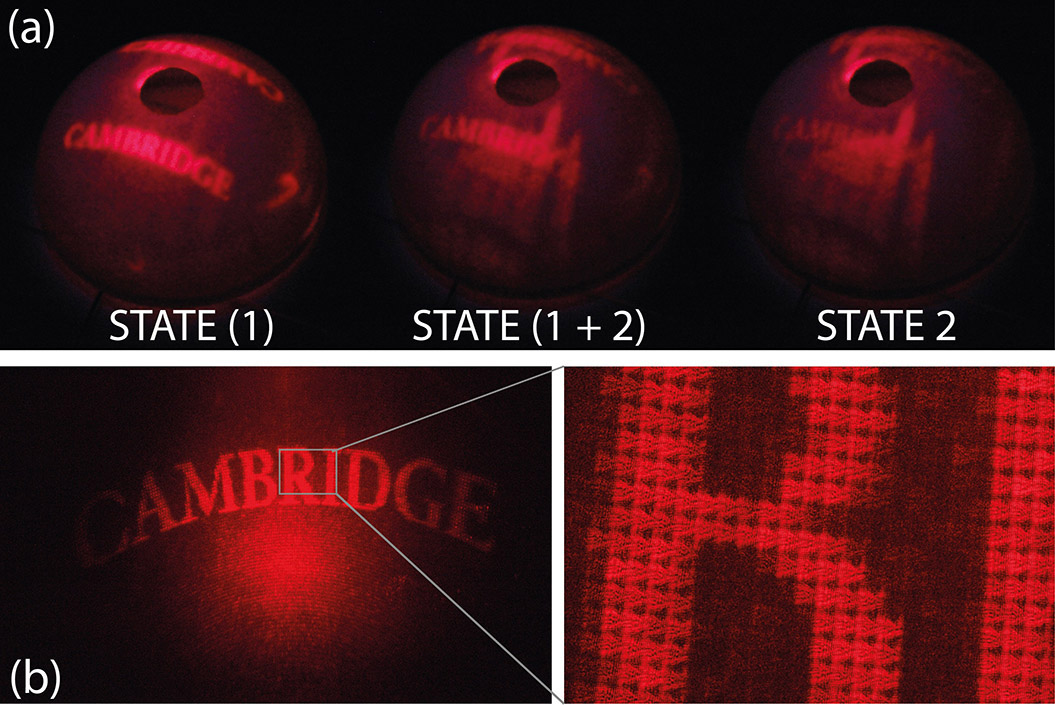 Figure 4. Output states of a single holographic pixel element under red laser light illumination (with varying polarization states) and collection on a diffuse hemisphere. (a) The three respective output states. (b) Output state (1) under increased magnification.

In summary, we have proposed and demonstrated a new type of pixel for future holographic displays in which the element itself is composed of plasmonic optical antennae that encode useful information such as digital holograms. Thus far, our research has only demonstrated single-pixel capability. Scaling to full-size, active-matrix backplanes is currently beyond our in-house fabrication capability. Our next steps involve new designs that will allow for even greater optical control and the integration of new thin-film materials. Only when performance of our small-scale systems is far beyond that of current technology is it worth considering full-scale backplane integration. We hope our work will be applicable not only to the display industry, but will also have many exciting applications in other industries that rely on the display and manipulation of the wavefront of light, such as additional multiplexing capability in telecommunication routing or additional optical control over biological specimens in targeted high-resolution optical microscopy.