SEOUL, South Korea, Jan. 17, 2022 — Researchers at the Korea Institute of Science and Technology (KIST) and Yonsei University are laying the groundwork for 3D digital holography on mobile devices. The group designed a photodiode that detects the polarization of light in the near-infrared region without the need for additional filters. Using this device, the researchers demonstrated miniaturized holographic image sensors for 3D digital holograms.

Further research could lead to the miniaturization of the entire holographic camera sensor module — a step that the researchers say opens the possibility of displaying 3D holograms on a typical smartphone.

Previously, large, specialized cameras with polarizing filters were needed to capture 3D holograms that were based on phase-shifting holography. Traditional polarization-sensing cameras cannot be miniaturized and integrated into portable electronic devices because they require an additional polarization filter that is several hundred microns in size and that is attached to an optical diode image sensor. 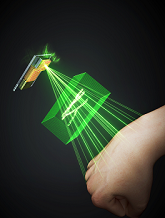 Schematic diagram of bio-application holograms. A sensor developed by a multi-institutional research team in South Korea can further detect near-infrared light, as well as previously undetectable visible light. The sensor is based on a photodiode and opens opportunities in various fields such as 3D night vision, self-driving, and biotechnology. Courtesy of KIST.

By leveraging the NIR selective linear polarization detection of this photodiode under photovoltaic operation, the researchers demonstrated digital incoherent holographic 3D imaging. According to the researchers, the photodiode device can photo-detect wavelengths from ultraviolet (UV) to NIR and is able to selectively detect the polarization characteristics of light in the NIR region.

According to the researchers, the WSe2/ReSe2 photodiode performed extremely well, with an ideality factor of 1.67; a broad spectral photo-response of 405 to 980 nm with a significant photovoltaic effect; outstanding linearity with a linear dynamic range wider than 100 dB; and rapid photo-switching behavior with a cutoff frequency up to 100 kHz.

Photodiodes, which convert light into current signals, are essential components within the pixels of image sensors in digital and smartphone cameras. Introducing the ability to sense the polarization of light to the image sensor of an ordinary camera provides a variety of new information, enabling the storage of 3D holograms.

“Research on the downsizing and integration of individual elements is required to ultimately miniaturize holographic systems,” KIST researcher Do Kyung Hwang said. “The results of our research will lay the foundation for the future development of miniaturized holographic camera sensor modules.”