The two-step reverse-tapering approach for conditioning SMF-28 to achieve optimal matching with LMA-25, which shows how the refractive-index profile (black lines) and the mode pattern (colored contour images) of SMF-28 vary along the two-step taper and meet LMA-25 at the splice interface. Courtesy of Limin Xiao via ACS Photonics.

The deployed method ensured precision matches in the mode field distribution and the cladding size between the two fiber types. By reverse-tapering the SMF and thermally expanding its core, the technique achieved a low splice loss of 0.23 dB and a mechanical strength that was an order of magnitude higher than that obtained by using a conventional sharp edge joint.

Optimal Coupling
Currently, physical characteristics of ULMA-PCFs — such as their ultralarge mode area, holey microstructures, and thick cladding — prevent them from forming high-quality splices with SMFs (producing high splice loss instead) and necessitating insertion of an intermediate fiber.

Still, their appeal remains high across photonics technologies due to a combination of their low nonlinearity and high lasing damage threshold.

“For fiber lasers and amplifiers, the general appeal is to achieve both high-power and high-quality beam output (single-mode operation) simultaneously, which is very important for laser micromachining or many other advanced applications,” said Limin Xiao, corresponding author on the paper describing the reverse-tapering method and a professor in the School of Information Science and Technology at Fudan University.

“However, there is a trade-off between these two factors. If you want the real high-power laser, the active fiber used should be heavily doped in the core to achieve the high conversion efficiency, which will increase the fiber numerical aperture (NA) and deliver multimode operation. The very high-power operation can also bring nonlinear effects and even damage the fiber itself if the core is small.”

The ULMA-PCF, on the other hand, balances between these two factors, due to its holey structure in the cladding that can sieve high-order modes through the microstructured cladding, even when the core is ultralarge.

Another quality is that the cladding of the ULMA-PCF is generally much larger than that of a conventional fiber, 125 μm, due the fabrication method required to build it. The new method can fatten the conventional fiber to match the mechanical properties and function of the commercially available ULMA-PCF used in the research, Xiao said.

Mode Matching Renders ‘Reverse’ Approach Favorable
Rather than “down-taper” the ULMA-PCF, the scientists opted to “up-taper,” or “reverse-taper,” the SMF. While both methods match the cladding sizes of the system’s two fibers, down-tapering reduces the size of the ULMA-PCF, making it unusable for applications using high-power lasers that would cause thermal damage at the splice point.

The two-step reverse-tapering process the researchers used ensured that the fiber core and cladding both enlarged at a common ratio, without altering the index contrast. As the SMF’s diameter increased, its numerical aperture remained unchanged and its normalized frequency increased. The process brought the normalized frequency of the two fibers very close together — an important quality for mode matching.

To then achieve a graded-index profile that extended beyond the original core, the fiber was heated without tapering to increase the mode field. The thermally expanded core (TEC) process allowed dopants present in the core to diffuse into the cladding, increasing the graded-index profile. The TEC process also caused germanium dopant ions to form a radial variation of the dopant concentration. The variation was Gaussian-like — as was the refractive index profile of the reversely tapered fiber itself.

The full process of the two-step reverse-tapering approach ultimately showed that the match itself was achieved by matching the fibers’ normalized frequency values and their mode-field diameters (MFDs).

Though the TEC process dropped the refractive index contrast between the core and the cladding, increasing the MFD, precisely controlling the heating parameters of the TEC process allowed the team to maintain the necessary mode shape, with an optimal normalized frequency value that did not distort the mode shape.

Low-Loss Fabrication Process
The refined reversely tapered fiber featured a fattened section at the waist point, which was fabricated by positioning a stripped SMF between two vacuum chucks as the bare section was heated. This caused that section to push inward and the bulged (fattened) section to expand. Heating zone length, initial fiber diameter, and the pushing distance combined to determine the fiber’s optimal waist diameter. Controlling those parameters, the researchers said in their paper, allowed them to enlarge the fiber to achieve the overall desired diameter and, simultaneously, increase its normalized frequency value. 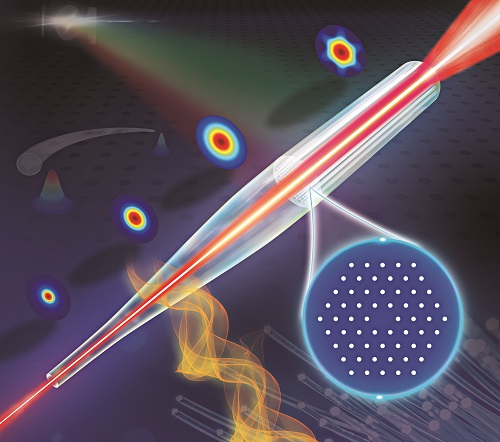 The refractive-index profile and mode pattern of the SMF vary along the two-step taper and meet the ULMA-PCF at the splice interface, which is indicated at the fattened fiber waist. The thermal process (orange flames) served to expand the fiber core. The thermally expanded core (TEC) process allowed dopants in the core to diffuse into the cladding, increasing the graded-index profile. Courtesy of Limin Xiao.

At a pushing rate of 120 μm/s, the method produced a reversely tapered fiber with a diameter of 258 μm in 70 s. The tapers that the researchers produced extended beyond 1500 μm.

The complete process demonstrated a loss lower than 0.01 dB. Testing confirmed that TEC had similar effects when performed before and/or after tapering.

Xiao said the TEC process itself may not be the most difficult part of the method; the difficulty of fabrication is the reverse-tapering and combining it with TEC. Reverse-tapering, he said, can be thought of as returning the fiber to its preform state — not like down-tapering, which stretches the fiber and keeps the fiber naturally straight.

“Reverse-tapering needs to push the fiber inward from two sides. It is easy to bend the fiber if the parameters are not carefully optimized,” Xiao said.

Using a commercial splicing system and a tapered SMF that was cleaved at its waist, testing revealed the minimum splice loss of 0.23 dB for light transmitting from the SMF to the ULMA-PCF. The cleaved angle was less than 0.2 degrees, formed at a tension of about 700 g. Parameters, such as fusion time (0.3 seconds), splicing power (80 W), and the offset (of 50 μm), also involved placement of a graphite filament (to prevent the collapse of air holes in the ULMA-PCF).

The tolerance in lateral alignment for a 1-dB splice loss was shown to be more than double the tolerance for splicing between two regular versions of the SMFs with which the research was performed. The…