Light-sensing proteins called rhodopsins are used in optogenetics to control neuronal activity, but existing rhodopsins can have low efficacy, especially when they are used to control synaptic activity between neurons. A mosquito-derived rhodopsin discovered by scientists at the Weizmann Institute of Science provides precise, spatiotemporal control of synaptic activity in the brain. Its use as an optogenetics tool could further scientists’ understanding of the functional roles of specific neuronal pathways.

The research team, which is led by professor Ofer Yizhar, uses optogenetic methods to study the signals that are passed between neurons through the synapses in the brains of live mice. “We can detect the presence of the various neurotransmitters, but different neurons ‘read’ those neurotransmitters differently,” Yizhar said. “Optogenetics enables us to not only see the ‘ink,’ but really to decipher the ‘message.’” 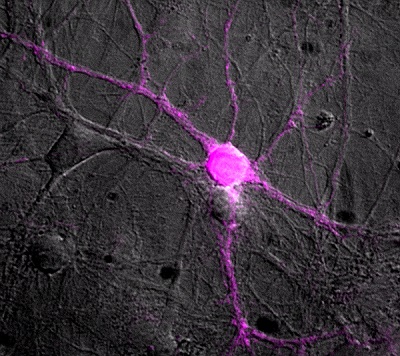 A neuron with its dendritic extensions expressing the mosquito-derived protein. Courtesy of the Weizmann Institute of Science.

Yizhar found that existing rhodopsins were not precise or stable enough for his team to study what signals were being passed through various synapses. To better understand the roles of different pathways, the scientists would need to find a rhodopsin that would give them more control. “We decided to look around and see what natural solutions exist out there,” Yizhar said.

After investigating a number of organic rhodopsin proteins, the scientists narrowed their choice to a rhodopsin from a mosquito. To evaluate the efficacy of their choice, they tested the mosquito protein against a drug that is known to reduce the strength of synaptic activity. They found that the mosquito-derived rhodopsin inhibited neurotransmission in neurons just as effectively as the drug, and that the rhodopsin was more stable.

Unlike a drug that affects numerous parts of the brain and is hard to control, the mosquito rhodopsin affects only the neurons that produce the mosquito sensor when light is shined on them. With the mosquito-derived rhodopsin, the scientists are able to modulate the brain’s synaptic activity in both space and time.

To test the efficacy of the new optogenetics tool, the scientists used it to block the release of the neurotransmitter dopamine on one side of the mice brains. When they shined green light on the hemisphere of the brain expressing the mosquito rhodopsin, they observed a distinct one-sided bias in the behavior of the mice.

“One of the major advantages of the mosquito rhodopsin is that it’s bistable — that is, it does not need refreshing — and it is potentially very specific, so that we can control just the precise synapses in which we are interested,” Yizhar said. “This is a very exciting technology, since it will allow us to discover the roles of specific pathways in the brain in a way that was not possible before. We think this mosquito protein could open the way to developing a whole family of new optogenetic tools for use in neuroscience research.”

The ability of the mosquito rhodopsin to selectively suppress neurotransmission between neurons could improve optogenetic methods for the study of neurotransmission in the brain, leading eventually to new and better treatments for neurological and psychiatric conditions.