MILAN, July 27, 2021 — A research team from Politecnico di Milano and the University of Bayreuth (Germany) has developed an approach for the quick measurement of chirality across a broad wavelength range. In molecules, chirality occurs when molecules contain the same atoms, but arranged in mirror-image configurations — much like a pair of hands.

The method addresses the challenge of distinguishing the chirality of a molecule; chiral molecules are almost identical in their physiochemical property.

Circular dichroism — an optical property for which left-handed and right-handed enantiomers (chiral drug molecules with opposite handedness) exhibit different absorption of polarized light — is used by scientists to determine molecular chirality. Commercial circular-dichroism spectrometers have been used for more than 50 years, and they can detect chirality at a specific wavelength. The measurement of a complete system requires time-consuming, sequential scanning using a monochromator.

That narrowband approach severely limits the broad use of the technique in more advanced applications, such as the real-time monitoring of chiral chemical reactions, and/or photoinduced changes in chirality.

The current work sends linearly polarized broadband light, from a halogen lamp, through the chiral sample, which rotates the polarization of the outgoing field. Using a sensitive balanced optical bridge and an ultrastable scanning interferometer, the researchers were able to measure the change of the polarization across a wide wavelength range.

Soumen Ghosh, lead author of the research, said that the method measures broadband circular dichroism spectra and optical rotation in a few seconds. “It allows us to monitor fast chiral chemical reactions in real time,” he said.

The work also uses readily available thermal light sources, and the setup accepts ultrashort laser pulses, which will enable the researchers to further extend the method to measure transient chirality changes and broadband chirality imaging. Given the high sensitivity of the setup, the researchers believe the work will pave the way for probing ultrafast chiral dynamics, which remains a challenge in the field of optical spectroscopy. 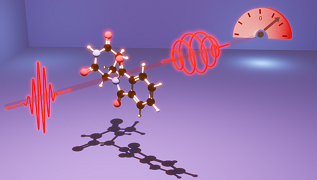 Pharmaceutical applications are among those that the method supports; enantiomers can have opposite actions within the human body. One might be highly effective at its intended function, whereas the other is ineffective or may even have harmful side effects.

The work was funded by the European Research Council, Marie Sklodowska-Curie Actions, and the EU’s Horizon 2020 research and innovation program.