The deep penetrating properties of terahertz radiation make it appealing for use in industrial and scientific imaging, materials analysis, and biomedical research. 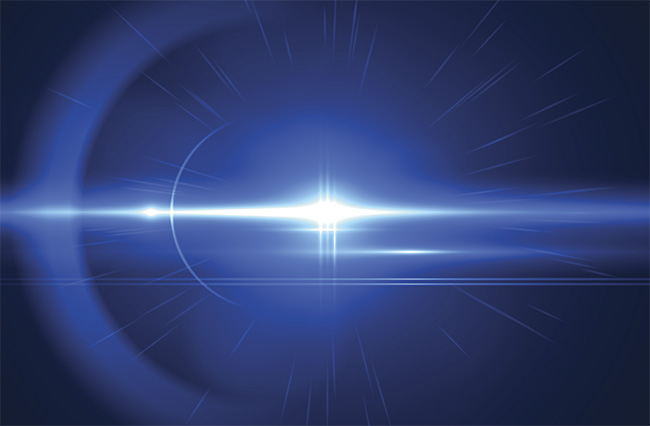 The terahertz spectral region, which falls between the microwave and infrared ranges, is one of the most promising regions of the electromagnetic spectrum for research and industry, but it is currently underutilized in these areas. There is no universal definition for what constitutes the terahertz band, but the frequency range of 0.1 to 10 THz (λ = 3 mm to 30 μm) is the most widely referenced (Figure 1). Due to its position within the electromagnetic spectrum, terahertz radiation has unique penetrating properties that make it highly attractive for spectroscopy and imaging applications across a wide variety of fields, including medical science, biology, security, astronomy, pharmaceuticals, materials science, and physics.

Figure 1. The terahertz band: 0.1 to 10 THz. Courtesy of Edinburgh Instruments.

Backward-wave oscillators and frequency multipliers are extensions of microwave-type oscillator technology into the terahertz region. They can provide high power, but they become impractical at frequencies above 1 THz. Difference-frequency generation utilizes two IR lasers that are offset in frequency to produce terahertz radiation at the difference-frequency of the lasers, which results in a highly tunable terahertz source, but with low powers in the microwatt range. Quantum cascade lasers have long held promise as a terahertz source. They continue to advance but currently require deep cryogenic cooling for continuous-wave operation in the terahertz region, partly due to scattering at high temperatures. They are limited to powers in the low milliwatts and operation above 1 THz.

Each of these sources is ideal for many terahertz applications, but, in general, they either suffer from low power or limited frequency range. For applications that require high power at discrete frequencies across the terahertz range, the optically pumped terahertz molecular laser is the ideal source.

In the optically pumped terahertz molecular laser, a pump laser is used to optically excite a vapor of polar molecules to a higher-lying energy level from which the molecules relax with the emission of terahertz radiation. The pump laser can take a variety of forms, with the most common arrangement being a CO2 infrared laser, the output of which is coupled into the terahertz molecular laser. This coupling can be either external, such as on an optical table, where the pump laser and terahertz laser are separate entities, or internal, where the pump and terahertz lasers are contained within a single unit.

The main components and the operating principle of the laser are shown in Figure 2. The schematic is based on an Edinburgh Instruments far-infrared laser (FIRL)-100, where the CO2 pump and the terahertz molecular laser are integrated into a single system capable of outputting both infrared radiation (9 to 11 μm, or 27 to 33 THz) and terahertz radiation (40 μm to 1.22 mm, or 0.25 to 7 THz). 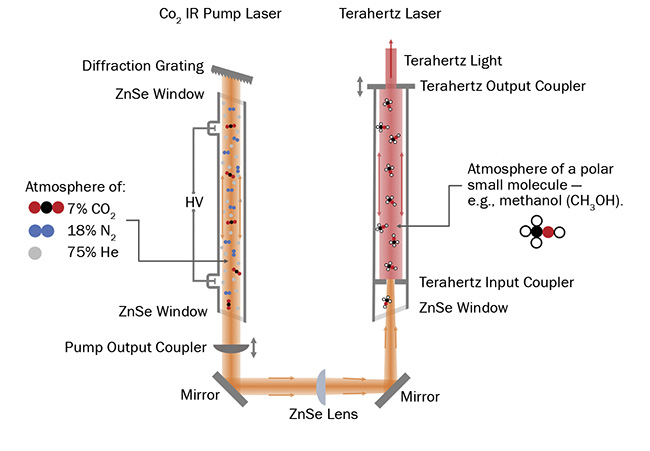 The process starts with the CO2 pump laser, which consists of an optical resonator formed between a diffraction grating and a partially reflecting zinc selenide (ZnSe) output coupling mirror. The ZnSe mirror is mounted on a piezoelectric transducer to allow for fine control of the resonator length. The gain stage is a high-voltage gas discharge tube — sealed with Brewster angle ZnSe windows — that sits between the grating and the mirror.

To achieve lasing, a carbon dioxide/
nitrogen/helium (CO2/N2/He) gas mixture is flowed through the discharge tube, and the N2 molecules are promoted to a vibrationally excited state via collisions with electrons from the electric discharge. The N2 excited state is close in energy to the 0001 vibrational excited state of the CO2 molecule, and population of the 0001 state proceeds through resonant energy transfer. A population inversion now exists between the 0001 and the lower-lying 0200 and 1000 vibrational states of CO2, facilitating stimulated emission and lasing to occur between them (Figure 3). 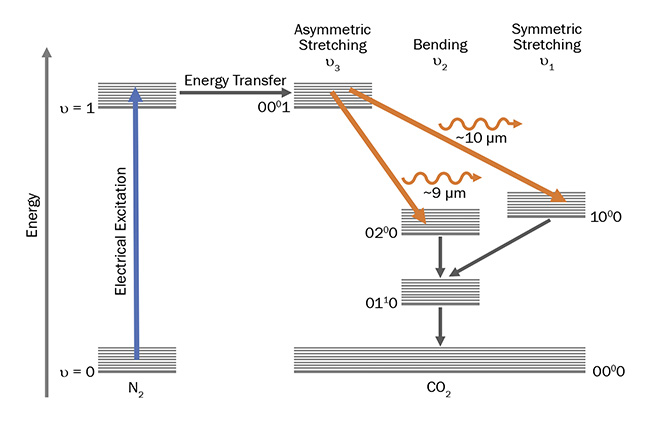 The vibrational transitions are grouped into two bands, the 10- and 9-μm bands, and within each band are a manifold of possible vibro-rotational lasing transitions with various emission wavelengths. By changing the angle of the diffraction grating (making a coarse adjustment) and the length of the optical resonator through the piezo mirror (fine-tuning), the desired transition can be brought into resonance — with ~80 laser transitions selectable between 9 and 11 µm (27 to 33 THz).

To generate terahertz radiation, the output from the pump laser is focused down and coupled into a sealed terahertz resonator. This setup comprises a ZnSe input Brewster window that forms a vacuum seal at one end of the resonator, an input coupling mirror, and a dichroic output coupler that enables extraction of the terahertz emission while reflecting the IR pump beam. The resonator is evacuated and filled with a low-pressure vapor of a small molecule possessing a permanent dipole moment — meaning that two or more atoms within the molecule have very different electronegativities. Optical pumping by the CO2 pump laser excites the molecules to a vibrational excited state (Figure 4), creating a population inversion between the rotational states, J, within the vibrational excited state, which can undergo stimulated emission and lasing. The transitions between the rotational states are much lower in energy than the vibrational transitions involved in the CO2 laser, falling within the 0.2- to 8-THz range. The output frequency of the pump laser is tuned to excite the desired vibro-rotational transition of the molecule. And the terahertz resonator length is tuned to select the rotational transition that is in resonance and, therefore, the output frequency of the laser. 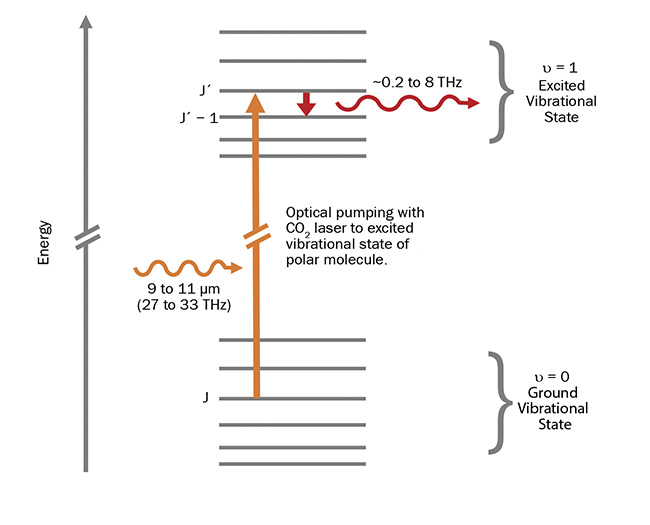