Researchers at Columbia University School of Engineering and Applied Science have developed a device that modulates visible light without dimming it, and in a small footprint with low power consumption. The work holds implications for applications including chip-scale lidar, AR/VR, holographic displays, quantum information processing, and optogenetics.

The device is based on micro-ring resonators, which dramatically reduce both the size and power consumption of the visible spectrum phase modulator from 1 mm to 10 µm for π phase tuning to below 1 mW. 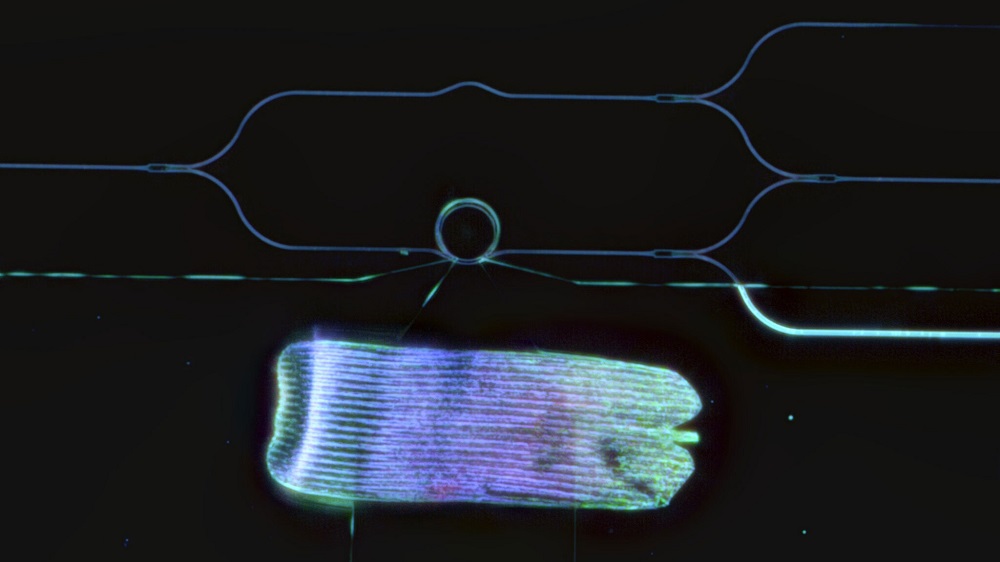 A visible-spectrum phase modulator (the ring at the center of a radius of 10 µm) is tinier than a butterfly wing scale. Courtesy of Heqing Huang and Cheng-Chia Tsai/Columbia Engineering.

“Usually the bigger something is, the better. But integrated devices are a notable exception,” said Nanfang Yu, associate professor of applied physics and co-principal investigator on the team. “It’s really hard to confine light to a spot and manipulate it without losing much of its power. We are excited that in this work we’ve made a breakthrough that will greatly expand the horizon of large-scale visible spectrum integrated photonics.”

Conventional optical phase modulators operating at visible wavelengths are based on light propagation in waveguides. Yu worked with colleague Michal Lipson, a leading expert on integrated photonics based on silicon nitride, to develop a very different approach.

“The key to our solution was to use an optical resonator and to operate it in the so-called strongly overcoupled regime,” said Lipson, co-principal investigator on the team and Eugene Higgins Professor of Electrical Engineering and professor of applied physics.

Optical resonators are structures with a high degree of symmetry, such as rings that can cycle a beam of light many times and translate tiny refractive index changes to a large phase modulation. Resonators can operate differently under varying conditions and therefore need to be used carefully. For example, if operating in the “undercoupled” or “critical coupled” regimes, a resonator will only provide a limited phase modulation and, more problematically, introduce a large amplitude variation to the optical signal. The latter is a highly undesirable optical loss because accumulation of even moderate losses from individual phase modulators will prevent cascading them to form a circuit that has a sufficiently large output signal.

To achieve a complete 2π phase tuning and minimal amplitude variation, the Yu-Lipson team chose to operate a micro-ring in the “strongly overcoupled” regime, a condition where the coupling strength between the micro-ring and the “bus” waveguide that feeds light into the ring is at least 10 times stronger than the loss of the micro-ring.

“The latter is primarily due to optical scattering at the nanoscale roughness on the device sidewalls,” Lipson explained. “You can never fabricate photonic devices with perfectly smooth surfaces.”

“Our best phase modulators operating at the blue and green colors, which are the most difficult portion of the visible spectrum, have a radius of only 5 µm, consume power of 0.8 mW for π phase tuning, and introduce an amplitude variation of less than 10%,” said Heqing Huang, a graduate student in Yu’s lab and first author of the paper. “No prior work has demonstrated such compact, power-efficient, and low-loss phase modulators at visible wavelengths.”

The devices were designed in Yu’s lab and fabricated in the Columbia Nano Initiative cleanroom, at the Advanced Science Research Center NanoFabrication Facility at the Graduate Center of the City University of New York, and at the Cornell NanoScale Science and Technology Facility. Device characterization was conducted in Lipson’s and Yu’s labs.

The researchers said that while they are nowhere near the degree of integration of electronics, their work shrinks the gap between photonic and electronic switches substantially.

“If previous modulator technologies only allow for integration of 100 waveguide phase modulators given a certain chip footprint and power budget, now we can do that 100 times better and integrate 10,000 phase shifters on chip to realize much more sophisticated functions,” Yu said.

The Lipson and Yu labs are now collaborating to demonstrate visible-spectrum lidar consisting of large 2D arrays of phase shifters based on adiabatic micro-rings. The design strategies employed for their visible-spectrum thermo-optical devices can be applied to electro-optical modulators to reduce their footprints and drive voltages, and they can be adapted in other spectral ranges (e.g., ultraviolet, telecom, mid-infrared, and THz) and in other resonator designs beyond micro-rings.