TROY, N.Y., Oct. 27, 2021 — To support the discovery of planets outside the solar system, scientists at Rensselaer Polytechnic Institute (RPI) created an experimental space telescope that can directly analyze the spectra of an exoplanet. The main component of the Dual Use Exoplanet Telescope (DUET) is a Fresnel hologram that can transform incident starlight directly into a spectrogram.

Fresnel holographic elements are created by exposing a light-sensitive plastic film to two sources of light positioned at different distances away from the film. The methods used for creating such elements have enabled designers to fabricate lenses that can focus light. However, they cannot separate light into its constituent colors.

In contrast, the holographic lens developed by the RPI team can render starlight in the visible and infrared wavelengths into a focused image or into a spectrum of pure colors. The Fresnel hologram is designed to function as both a focusing and a dispersive element.

To build a holographic lens for dual use, the researchers used two sources of light positioned close to each other, and that created concentric waves of light that can either build or cancel each other out as they travel toward the film. Visiting researcher Mei-Li Hsieh devised mathematical formulas that allow the pattern of convergence or interference to be tuned, so the researchers can control the hologram’s output.

The pattern of the light is recorded onto the film as a holographic image. Depending on how the image is structured, light passing through the holographic optical element is either focused or stretched.

“We use two spherical waves of light to produce the hologram, which gives us fine control over the diffractive grating recorded on the film, and the effect it has on light — either separating light with super sensitivity, or focusing light with high resolution,” said Hsieh, who holds a faculty position at National Yang Ming Chiao Tung University in Taiwan.

“We wanted to stretch the light, so that we could separate it into different wavelengths. Any Fresnel lens will stretch the light a little, but not enough,” professor Shawn-Yu Lin said. “With our method, we can have superresolution on one end, or supersensitive — with each color separated. When the light is stretched like that, the color is very good, as pure and as vivid as you can get.”

The researchers demonstrated a dispersion of a 430- to 700-nm wavelength over a 190-mm on-axis distance, which led to a superfine spectral resolution of 0.0266 nm at a 515-nm wavelength for a detector size of 20 µm.

The researchers said their work represents the first successful implementation of a scale-model optical system for a Fresnel hologram telescope.

Telescopes that are launched into space are limited by the weight and bulk of the glass mirrors used to focus light. Realistically, these telescopes can be only a few meters in diameter. On the other hand, the holographic lens used to focus light on DUET, free of conventional glass mirrors and lenses, is lightweight enough to be multiple meters in diameter and flexible enough to be rolled for launch and unfurled in space. It could be used to directly observe an exoplanet — which could be a big step up from current methods that detect exoplanets indirectly, based on an exoplanet’s effect on the light coming from the star it orbits.

The proposed space telescope has a low areal mass, which makes it suitable for space exploration. It can simultaneously support superresolution spectroscopy and high-detection sensitivity. 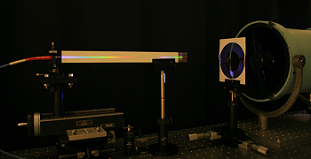 An experimental space telescope that can directly analyze the spectra of an exoplanet uses a Fresnel hologram that can transform incident starlight directly into a spectrogram. The design, introduced by a team at RPI, will enable direct exoplanet imaging, thereby supporting the discovery of planet-star separation. Courtesy of Rensselaer Polytechnic Institute.

“We believe this model could be useful in applications that require extremely high spectral resolution spectroscopy,” Hsieh said.

“To find Earth 2.0, we really want to see exoplanets by direct imaging — we need to be able to look at the star and see the planet separate from the star. And for that, we need high resolution and a really big telescope,” professor Heidi Jo Newberg said.