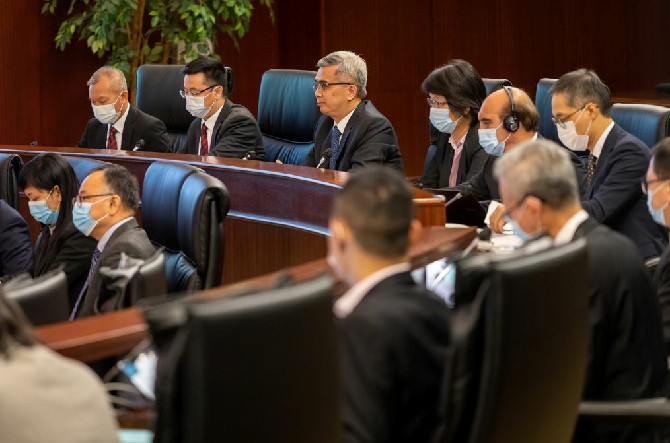 The hazardous materials warehouse in which the government plans to keep all inflammable, toxic, and dangerous materials will be ready by September next year, the Secretary for Security, Wong Sio Chak, reaffirmed at the Legislative Assembly (AL) on Monday.
Wong was at the AL presenting and discussing the new law that will regulate such materials as part of the relevant bill’s first reading when he was questioned on the matter by lawmakers.
In response to an inquiry from lawmaker Ella Lei as to when the new warehouse would be ready, Wong said, “We expect [the storage] to be completed by September 2022 and, once the necessary conditions are guaranteed, we will proceed with the transfer [of the substances currently dispersed over seven different locations] all to this facility, first to a temporary store, and then in a second phase to an area of permanent storage.”
The Secretary also admitted that there is an ongoing judicial case regarding the matter, but explained, “It [does not have to] do with the land retrieval by the government, so it won’t affect the progress of the construction of the infrastructure.”
The government also announced that the new, and soon-to-be only, facility in Macau suitable for receiving such materials would be located in the Ka Ho area in the building that was previously occupied by the community center for drug rehabilitation, “Teen Challenge”.
The new hazardous materials warehouse will be located adjacent to the new Coloane Prison, the construction of which is also ongoing.
In a session in which the warehouse and its operation was the subject of most questions, instead of the law itself, Wong also explained that the management of the new facility would most likely be assigned to a private company.
“For the time being, we are more inclined towards the idea of attributing the management to a private entity. This is because, on the one hand, the government cannot handle everything, and on the other, attributing the management to a private [entity] will benefit from this entity’s expertise in dealing with these types of materials,” the Secretary explained.
He also clarified that the storage of materials would be subjected to a fee to be paid by the owners of the materials, although the amount, that should be related to the space occupied, has not yet been fixed.
The new law, which was approved unanimously upon its first reading, aims to regulate the production, transport, storage, and use of hazardous substances. The legal regime also creates a new crime of the “possession, producing or [use of] prohibited dangerous substances” with a penal framework providing for up to three years of imprisonment.
Fines are also set for the misuse, mishandling or illegal storage of the materials and they can range from 2,000 patacas up to 500,000 patacas if the illegality is committed by a person, or up to 1 million patacas if the offence is attributed to the responsibility of a company.
The government initiated the legal development of the regime as well as the idea of building specific facilities for the storage of hazardous materials after the central government issued guidelines to every province on the topic in the aftermath of the explosions that occurred in a chemical factory located in an area of the Port of Tianjin, on September 12, 2015. According to official reports, the explosion caused the death of 173 people as well as the equivalent of more than 8 billion patacas of estimated economic loss.

Read More:Hazardous materials warehouse to be ready by September 2022