For a few years running, the Pixel A-series phone was a no-brainer: always the best Android phone in its midrange class. With the Pixel 6A, things are a little different. Google is shifting its priorities for its Pixel phones, and competitors like Samsung have closed the gap. The 6A still has the best performance and camera quality at its price, but it’s not quite the shoo-in that it once was.

As is tradition for the A-series, the 6A offers most of what the Pixel 6 does — and to a lesser extent, the Pixel 6 Pro — for a much lower cost: $449 instead of the Pixel 6’s starting price of $599. You don’t get wireless charging, a glass back panel, or a faster screen refresh rate. But you do get the same core features as the flagship models. In previous years, that meant the very same class-leading camera as the pricier models but usually a less robust processor. That’s not the case this year; instead, you get Google’s custom-built processor, Tensor. 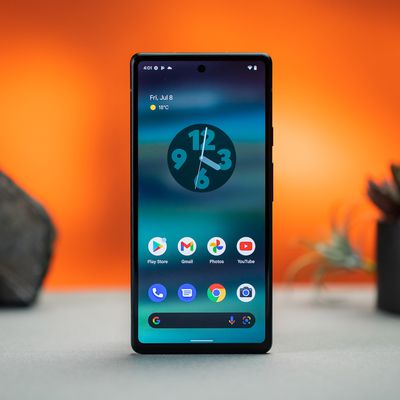 Tensor enables some AI and machine learning driven features, like better real-time transcription and HDR video recording at the camera’s highest resolution and frame rate. But mostly, the chipset enhances things that Pixel phones could already do, like live translation, by running them more efficiently so you can use them more without running your battery down.

Most importantly, it means you can actually keep using this phone for more than a few years, which is a more typical shelf life for a sub-$500 phone. It offers the best longevity among midrange Android phones, rivaled only by the iPhone SE for pure return on investment value. The SE may well get software updates a year longer than the 6A, but the Pixel offers a much better screen compared to the SE’s comparatively puny 4.7-inch display.

Keeping Tensor as the 6A’s core feature is a hint at where Google is steering the Pixel series for the future. As for the here and now, it makes the 6A into an excellent midrange phone. It doesn’t offer the very best screen for the money — that honor goes to the Samsung Galaxy A53 5G. But it is the best performer for under $500 (at least among options available in the US). On top of that, it’s a comfortable size with unfussy software and a great camera, and it should keep running well for years to come. That’s worthy of an A grade for sure.

The Pixel 6A is the smallest of the three 6 series phones, but maybe the best way to describe it is that it’s the least big. Next to the Pixel 6 Pro with its 6.7-inch screen and the 6.4-inch Pixel 6, the Pixel 6A feels downright petite. I contest that its 6.1-inch screen is the best compromise between a small (read: reasonably sized) phone and the gigantic phones everyone else seems to want, but that’s just my own personal hill to die on.

The screen on the 6A is a 1080p OLED panel with a standard 60Hz refresh rate, a step down from the 6’s 90Hz screen. After using a 120Hz screen for a while, I definitely notice the difference going back to 60Hz. I’d never see it without having the faster refresh rate to compare it to, but motion looks jerkier and it gives the phone a less than polished feel. Still, LCD panels are quite common in the $500 and below class, so the richer contrast of an OLED is welcome here. It’s not terribly comfortable to use outside in direct sunlight, either, but it gets bright enough to be usable.

For longevity and the very best performance, the 6A is the way to go

Generally speaking, the A53 prioritizes the surface-level specs, including that fancy screen, but its processor isn’t as snappy. It feels more like a budget phone with a few elevated components rather than the other way around. Day-to-day performance is just a little more sluggish, and that’s only going to degrade over the next three or more years. For longevity and the very best performance, the 6A is the way to go. But if a big screen is important to you and you only plan on keeping your phone for a few years anyway, then the A53 is the better choice.

The Pixel 6A doesn’t just borrow the 6’s processor; it carries over the entire design language Google introduced with the 6 series. The horizontal camera bump on the back panel protrudes a bit less, but otherwise, it’s the same distinct design. I can’t say I love it. The black rails and camera bar contrast so harshly with the soothing sage green on the back panel. I didn’t mind the design when it debuted on the 6 and 6 Pro. But I’ve been disliking it more and more over the past year, and I have a feeling it’s not going to age well.

The 6A includes 128GB of storage — with no card slot for expansion — and 6GB of RAM. That’s the only variant, and it has 2GB less RAM than the base model Pixel 6. For day-to-day use, this doesn’t seem to impact performance. The system feels responsive as I jump between tasks, and apps stay open in the background long enough not to frustrate me.

It handles heavy tasks well, too — better than the A53 5G does. The phone runs graphics-intensive games like Genshin Impact fairly smoothly, with some dropped frames here and there. There’s also very little lag in the camera app, even firing off multiple portrait mode shots back to back. Both the (pre-Tensor) Pixel 5A and the 6A let me take about four portrait mode shots in quick succession before they need to buffer and lock out the shutter button. The 5A needs a full four to five seconds to process the shots, but with the 6A, I can start shooting again in about a second. That could mean the difference between getting the shot you wanted or watching the moment pass you by with a grayed-out shutter button. It’s also well beyond what I’d expect of most midrange smartphones, and Tensor is surely helping to make the difference here.

The Pixel 6A’s fingerprint scanner has been the subject of a lot of speculation — specifically along the lines of “maybe it won’t be as terrible as the one in the 6 and 6 Pro.” I’m not convinced that it’s any better. Using the 6A and the 6 side by side, I can see the 6A sensor responding quicker sometimes. But, just as often, it’s the same speed as the Pixel 6. It also feels just as prone to asking me to rescan my fingerprint or press my finger a little longer. In any case, the Galaxy S22’s sensor feels a touch faster than either of the Pixels’ — and since Samsung’s sensor is ultrasonic rather than optical, it doesn’t fill your dark bedroom with blinding light when you use it. If you were hoping that the 6A would address that Pixel 6 shortcoming, then I’m sorry to say you’ll be disappointed.

The 6A’s haptics are nice. They’re subtle but reassuring as you’re typing and tapping. However, something about the phone’s design (I strongly suspect the camera bump) makes it sound as loud as a foghorn when it’s sitting on a wooden table and a notification sets the vibration off. I can hear it across the house. I turned vibrations down a notch but that hasn’t really helped. I guess I’d just get used to finding something soft to put the phone down on when I wasn’t using it. Or put a case on it like a sensible person.

There’s a relatively small 4,410mAh battery powering the Pixel 6A, but the tight relationship between…