Extreme-UV interference lithography (EUV-IL), at a wavelength of 13.5nm, has proved to be a powerful technique due both to its relative simplicity and record-high-resolution patterning capabilities. In an EUV-IL setup, a mask with transmission-diffraction gratings is illuminated by a spatially coherent beam of EUV light from an undulator synchrotron source. Periodic images are then created by the interference of two or more diffracted coherent beams (see Figure 1). The sinusoidal aerial image produced by two-beam IL has a period that is half of the original mask grating period when first-order diffracted beams are used. Consequently, this method provides a demagnification of grating patterns that are written by electron beam lithography (EBL). Moreover, versatile periodic patterns and quasi-periodic patterns can be obtained by using multiple beams and by controlling their phases.1, 2 The ultimate resolution (i.e., half-pitch, HP) that can be achieved with EUV-IL, however, is limited by light diffraction. Although it is therefore theoretically possible to resolve features to below 4nm with EUV-IL,3 the achievable resolution is limited by the grating resolution and by other factors. 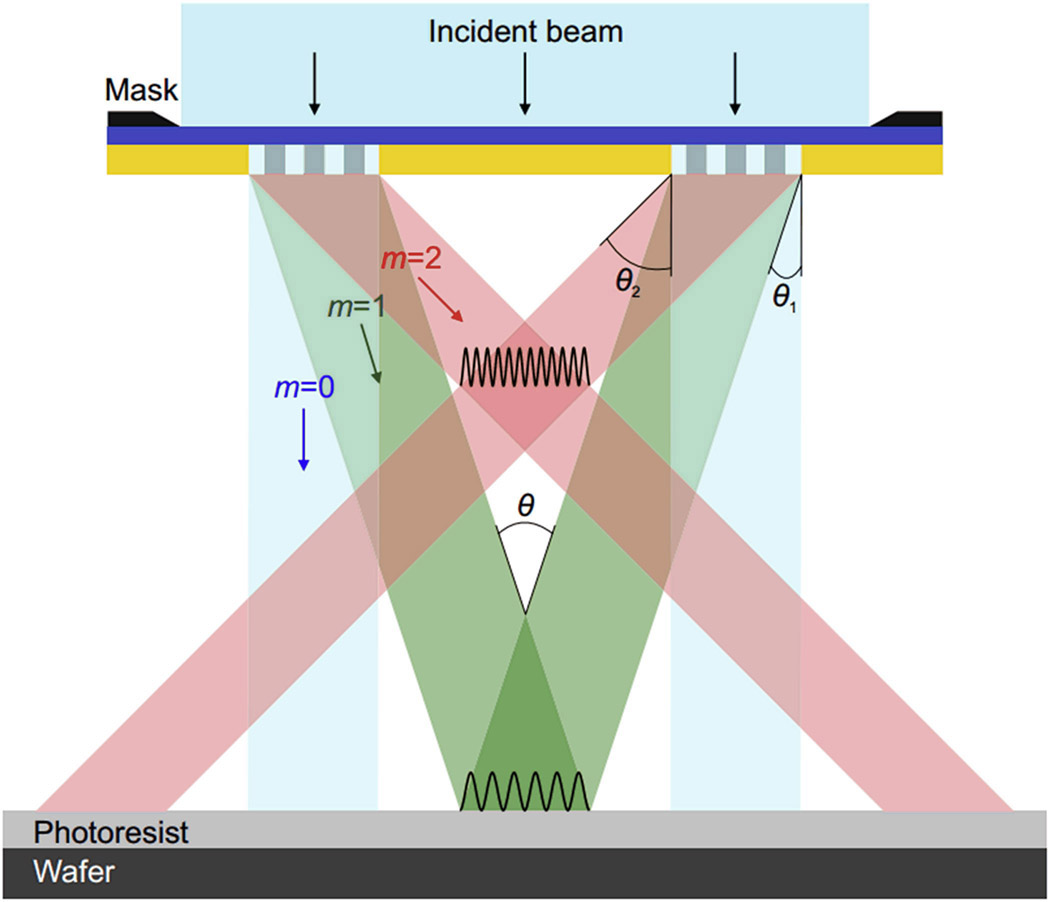 In addition to high resolution and throughput, EUV-IL offers many other advantages, such as achromaticity, insensitivity to misalignment, and infinite depth of focus, making this lithography technique extremely useful.4 For example, with EUV-IL, it is possible to pattern high-resolution periodic images to create highly ordered and dense nanostructures. Such structures can be difficult or time-consuming to pattern by EBL, but are interesting for a wide range of applications, such as nanocatalysis,5 electronic6 and photonic devices,7 and fundamental materials analysis.8

In this work,9 we discuss the long-term performance and capabilities of EUV-IL activities at the Paul Scherrer Institute (PSI), Switzerland. We also describe some of the state-of-the-art research that has been conducted at PSI. In particular, we focus on the X-ray Interference Lithography (XIL) beamline at PSI, which is illuminated by the co-located Swiss Light Source.

We have been able to achieve resolution down to 10nm HP by using masks that consist of silicon oxide diffraction gratings.10, 11 These gratings are directly written on silicon nitride membranes (<100nm thick), via EBL from hydrogen silsesquioxane. Below 10nm HP, however, the use of silicon oxide gratings drastically reduces the EUV diffraction efficiency (≪1%).7, 12 Record-high, sub-10nm resolution dense patterning down to 7nm HP has nevertheless been accomplished by EUV-IL at PSI through the use of novel resists based on tin oxide and hafnium oxide (see Figure 2).3,13 These negative-tone, metal-oxide-based resist materials can easily be spin-coated and directly patterned when they are exposed to an electron or photon beam. This enables the direct fabrication of gratings with high diffraction efficiencies, which are theoretically sufficient to pattern images with a resolution down to 5nm HP (∼3%).3, 10 Furthermore, using a period-doubling fabrication method, we produced a mask with iridium gratings (high diffraction efficiency) capable of lithographically patterning an impressive 6nm HP: see Figure 2(d) and (e).14 We have also used a pattern transfer onto a silicon-on-insulator substrate to fabricate well-ordered arrays of ultrathin, suspended silicon nanowires down to 6.5nm linewidths: see Figure 2(f). We plan to study these arrays as field-effect transistors, biosensors, or thermoelectric devices. 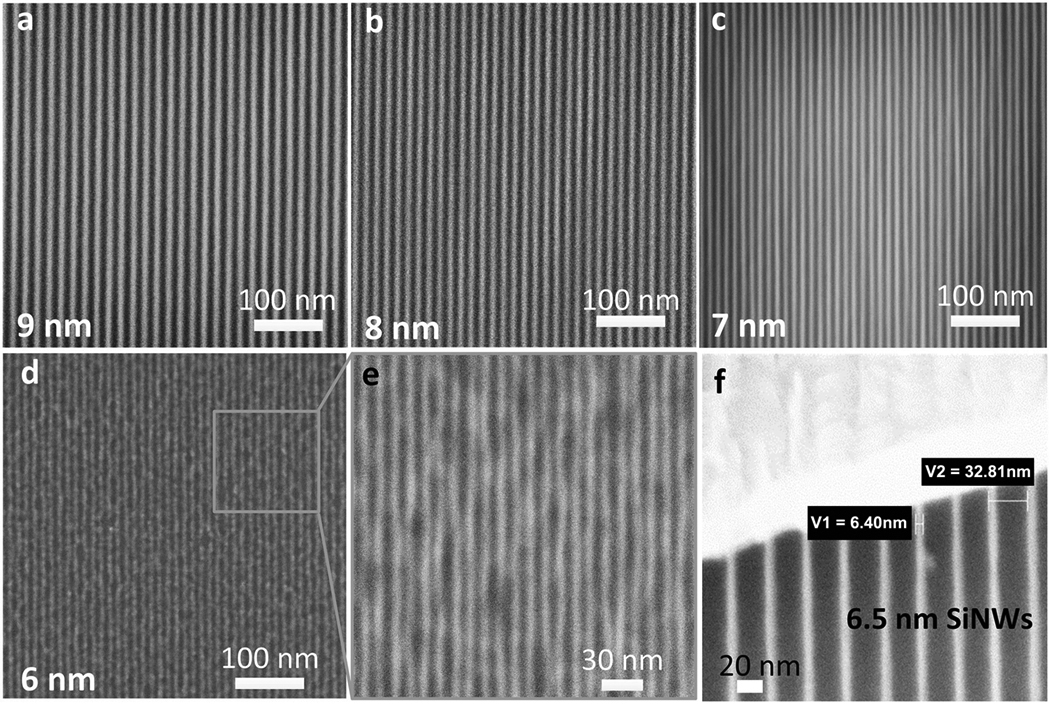 Figure 2. Scanning electron microscropy (SEM) images of line/space (L/S) patterns with 9–6nm half-pitch (HP) resolution. These patterns were obtained by EUV-IL on hydrogen silsesquioxane (with a high-resolution negative-tone electron beam or EUV resist), and with the use of (a, b) tin oxide and (c) hafnium oxide gratings directly patterned by electron beam lithography, and (d, e) iridium gratings fabricated by a pitch-doubling method.14 (f) Top-view SEM micrographs of silicon nanowires (SiNWs), with 6.5nm linewidths, directly transferred by reactive ion etching from patterns created by EUV-IL and thinned down by performing consecutive cycles of piranha solution and buffered hydrofluoric acid dips. V1, V2: Indicators of scale.

Another application of EUV-IL, owing to its high resolution and relatively high throughput, is the development of model systems with precise nanoparticle size and position over large areas. In particular, we have shown that EUV achromatic Talbot lithography (ATL)—another simple but powerful interference scheme that uses a single grating and is based on the Talbot effect—yields well-defined dot sizes.15, 16 Using step-and-repeat EUV-ATL exposures, we obtained 15nm dots that had a pitch of 100nm and were spread over an area of several square centimeters with high uniformity.5 This IL technique offers substantial opportunities in the field of nanocatalysis, where single-particle-level studies are necessary to gain deeper insight into chemical mechanisms.17 We have also developed a novel method for the direct measurement of the absorption and Dill parameters of photoresists at the EUV wavelength of 13.5nm.18 These are key parameters needed for the accurate simulation and modeling of the dose response of a photoresist, but that are not widely studied because of the lack of bright EUV sources.

EUV-IL is also extensively used for EUV photoresist testing and development, enabling research before industrial exposure tools are available.11, 19,20 The well-defined and high-resolution aerial imaging of EUV-IL, as well as its relatively low cost, make it an essential tool for the evaluation of EUV photoresists and their timely development. This is particularly important today because it is predicted (according to the semiconductor industry roadmap) that the introduction of EUV lithography (EUVL) to high-volume manufacturing, at the 7nm node, will occur in the near future.21 We have thus evaluated hundreds of state-of-the-art EUV materials from different vendors all around the world.11, 20,22–24 Among these, we have identified several promising chemically amplified resist (CAR) candidates for future testing. These candidates simultaneously meet sensitivity (best energy), linewidth roughness, and exposure latitude requirements for the successful introduction of EUVL into high-volume manufacturing at the 7nm logic node (16nm HP).19, 22 Although several resists at 13nm HP (5nm node) and below are well resolved, pattern collapse and pinching still limit the exposure latitude of CARs. We show a high-performance CAR, however, in Figure 3. This example is well resolved down to 12 and 11nm HP with minimal pattern collapse and bridging. Although this CAR example is remarkable, it is clear that there is still an impending need for alternative resist solutions at 13nm resolution and below.

Figure 3. SEM L/S images showing one of the highest-performing chemically amplified resists at (a) 12nm and (b) 11nm HP resolution. Minimal pattern collapse and bridging are observed. (Adapted from Buitrago et al., 2016.22)

In summary, we have presented a number of examples that showcase EUV-IL as a powerful enabling technology for academic and industrial research. We believe that, in the future, the interest in EUV-IL will increase as EUVL enters into the high-volume-manufacturing phase. Consequently, we will continue working with industry to develop the resist technology for the 5nm node and beyond. We will also continue to enable the fabrication of high-resolution periodic structures that are only possible with EUV-IL.

Elizabeth Buitrago is a research scientist at PSI working in collaboration with ASML on the extension and development of EUV resists using the EUV-IL system at the Swiss Light Source. During her PhD at the École Polytechnique Fédéral de Lausanne, Switzerland, she developed a 3D vertically stacked silicon nanowire–field-effect transistor for attomolar sensing of biotin.