The researchers created diffractive optical networks that take an input light pulse and pass through 3D-printed layers designed by deep learning, which then shape the output pulse leaving the optical network in a desired temporal waveform. The network was demonstrated in the terahertz region of the electromagnetic spectrum for the first time, according to the researchers, showing a synthesis of various forms of terahertz pulses.

In accurately controlling the phase and amplitude of a broadband input pulse over a continuum of wavelengths, the researchers generated different pulse shapes, with differing pulse widths. 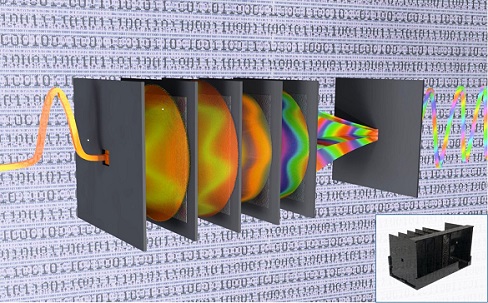 According to Aydogan Ozcan, Volgnau Chair for Engineering Innovation and a Chancellor’s Professor of Electrical and Computer Engineering at UCLA, the framework can be applied to other parts of the electromagnetic spectrum to shape optical pulses. He believes the work will find broad applications in various venues where light pulses are used — in ultrafast imaging, spectroscopy, and optical telecommunications.