Compact, common-path digital holography could play an important role in the manufacture of highly stable optical measurement and imaging instruments, according to a scientific group at Northwestern Polytechnical University in China. The group published its review of the different approaches to common-path, off-axis digital holography and investigated the advances that have been made in this branch of optics.

The temporal stability of the experimental setups for hologram recording can be significantly improved for time-lapsing measurements, the research group determined. It additionally categorized three distinct, common-path models: lateral shearing, point diffraction, and other. These categorizations were based on the different approaches used to generate the reference beam.

In conventional off-axis holographic setups, the object and reference beams propagate along separate paths. This can result in low temporal stability. Common-path configurations that allow the two interference beams to share the same or similar paths can compensate for the effect of environmental disturbances and improve the temporal stability of the experimental setups for hologram recording and time-lapse measurements.

The researchers say that the key to designing a common-path configuration is to generate a uniform reference beam that allows the two interference beams to pass along similar paths. The more similar the paths are, the more stable the optical setup will be.

In their paper, the group, led by professor Jianlin Zhao, described the design principles for each category, presented application examples, and explored commercial manufacturing prospects for the use of common-path, off-axis digital holography in high-stability optical instrument manufacturing.

Therefore, the test sample in the lateral shearing-based common-path configuration must be sparse in the field of view, or only a portion of the beam will illuminate the sample. In this manner, the effective interference area, that is, the overlapping area of the two beams with and without the sample information, is achieved.

Lateral shearing supports a simple, compact design. However, because it requires an undisturbed portion of the illumination beam to generate the reference beam, the field of view is reduced. It is typically used for spatially sparse samples, the researchers said.

The point-diffraction-based approach to common-path, off-axis digital holography is so called by the researchers because it generates the uniform reference beam by diffracting the object beam through a “point” pinhole, via low-pass filtering in the Fourier domain. The interference beams pass through identical optical elements, ensuring high temporal stability. This approach addresses the issue of a limited field of view, but typically requires a complex configuration.

Point diffraction is suitable for measuring microscopic samples with high spatial frequency, as it is relatively easy to generate the uniform reference beam by spatial filtering. Owing to its high stability and compact features, the point-diffraction-based common-path digital holographic microscope has been widely used in biological studies and material science applications.

In the third category, the researchers include advanced designs that used folding mirrors, specially positioned beamsplitter cubes, and Wollaston prisms. One example used a self-referencing Lloyd’s mirror configuration. The laser beam passing through the sample is first expanded via a microscope objective. Then, a mirror folds a part of the divergent beam onto the CMOS target. The straight propagating beam carrying the object information and unperturbed reflection beam interfere with each other to form the off-axis hologram. 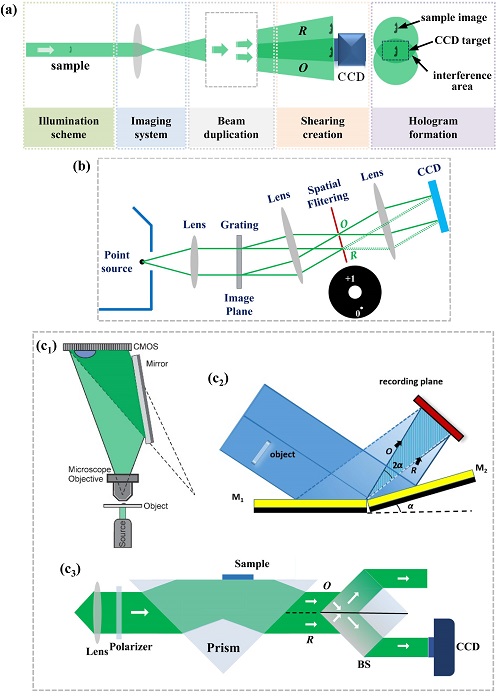 According to the researchers, this setup is compact, portable, stable, and easy to implement.

Other advanced designs have been proposed to construct common-path, off-axis holographic experimental setups. These innovative designs could overcome the drawbacks of lateral shearing and point diffraction.

Common-path configurations typically include fewer optical components than traditional interferometers, which makes them desirable for the manufacture of compact, highly stable off-axis holographic instruments. The instrumentation of common-path digital holography could open a path to new interdisciplinary research directions in the fields of optical, electronic, and mechanical engineering. Owing to the high stability of common-path holographic instruments, their use does not need to be confined to laboratories. The researchers believe they could be of wide use in the chemical industries, biomedicine, and other fields.