Microelectromechanical systems (MEMS) are microdevices composed of mechanical elements, electronics, sensors, and actuators, built within a small volume.1 They have several everyday uses, such as within mobile phones, cars, game consoles, and printers. MEMS devices are fabricated by superimposing various layers of different materials, through a number of process steps, on top of a silicon substrate.1 These complex procedures, however, can cause damage or introduce residual stresses to the structures. As a result, unwanted deformations can compromise the final performance of MEMS devices. In addition, the performance of MEMS devices can deteriorate because of aging. The characterization of mechanical properties at different manufacturing steps, or during the mode of operation, is therefore required to provide a full characterization of these systems.

In standard characterizations of MEMS, conventional optical microscopy techniques are generally used. With these techniques, however, it is not possible to obtain a full 3D profile of the structures. This is because of an intrinsic limitation to the spatial resolution of the measurements along the z-axis.2, 3 In addition, it has previously been demonstrated that digital holography (DH) can be used to investigate engineered surfaces on the microscale level and thus overcome some of the limitations of classical microscopy.4

In this work,5 we describe and illustrate the general principles of DH for microscale characterizations. The DH process is based on recording of the interference pattern that exists between object and reference coherence waves, with the use of a digital device (e.g., a CCD or CMOS).4 DH has been made possible because of the technological evolution of camera sensors and computers, i.e., because it is now possible to implement holography in a ‘digital way,’ and it can be used in optical metrology to conduct full 3D, high-resolution, and real-time analyses. In DH, numerical tools are required to perform the reconstruction process, via the numerical propagation of the front wave.6 Using DH, MEMS devices can therefore be studied in both static and dynamic conditions.4 This makes DH an attractive technique within industry for making metrological measurements.4

Although all the information necessary to recover the profile of a sample is numerically encoded within a digitized hologram, the presence of physical optical elements in the measurement setup inevitably leads to aberration errors in the reconstructed 3D profile. For example, the use of a microscope objective gives rise to a higher, parabolic term. In addition, reconstruction can be made difficult because of slight misalignments that introduce coma and astigmatisms. In our approach, the curvature correction can be obtained with the use of a ‘double exposure technique.’ In this technique, the first exposure is for the sample under investigation and the second exposure is for a flat reference surface (in proximity to the sample).6 The reference hologram contains the same aberrations as those in the MEMS hologram (i.e., introduced by the optical setup). We can thus remove these aberrations numerically by subtracting the MEMS hologram from the reference one. It is not always possible, however, to record the reference hologram. In such a case, a digital compensation of the aberrations—based on a single recording—must be implemented. We have demonstrated that the numerical version of lateral shearing interferometry (LSI) is an effective method to implement such corrections.7 This method allows only the parabolic phase factor (i.e., introduced by the microscope objective) to be removed, assuming that the other aberration terms are negligible.

We illustrate our double exposure technique and LSI method for an example MEMS application in Figure 1. First, we obtain a scanning electron microscope image—see Figure 1(a)—of the MEMS. We then obtain a wrapped phase map of the MEMS—see Figure 1(b)—from the double exposition method. The circular fringes on the tip of the object are caused by an undersampling artifact.7 For the LSI subtraction, the curvature of the object is superimposed on a linear term. The results of this subtraction—see Figure 1(c)—illustrate a tilt (along the direction of the shear) that can be removed, as shown in Figure 1(d). In the final steps, we obtain the linear profile of the object along the maximum curvature and the 3D profile of the tip, shown in Figure 1(e) and (f), respectively. 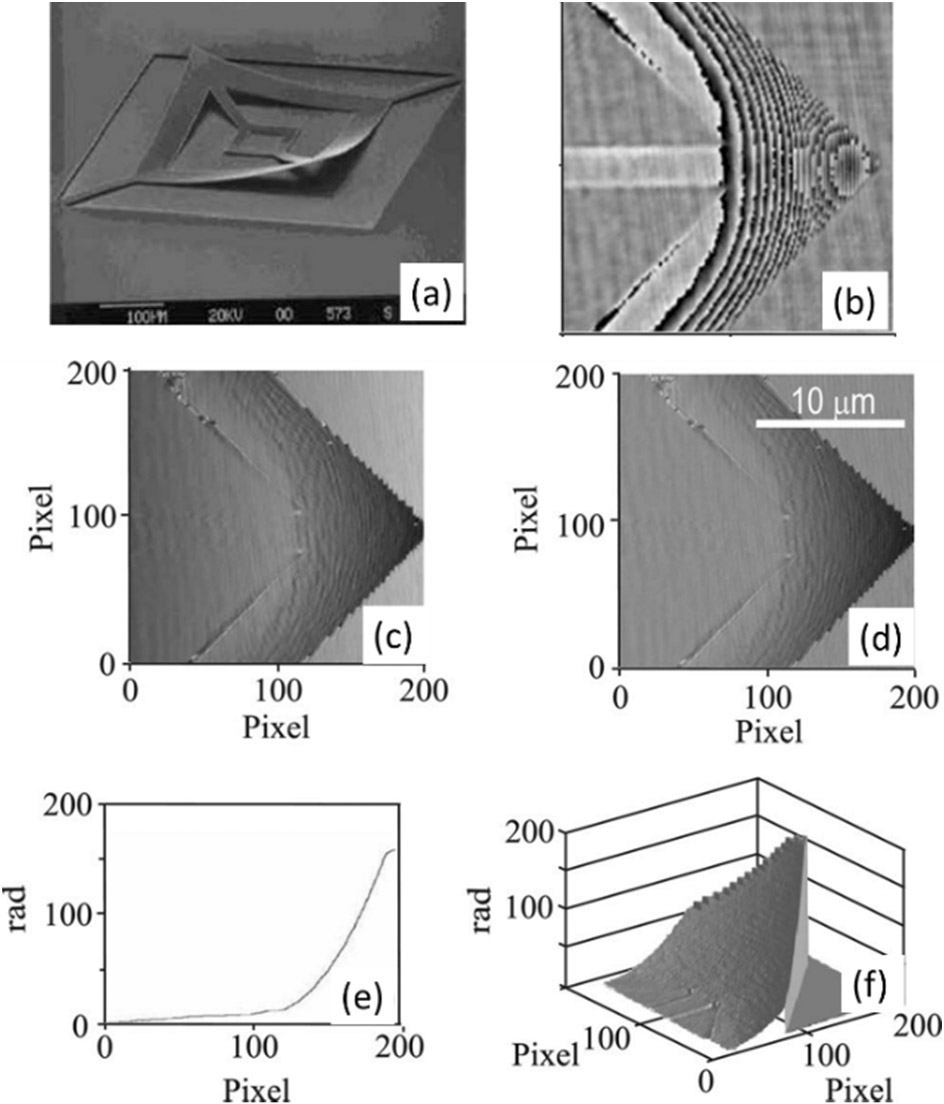 Figure 1. Illustration of the double exposure digital holography technique and lateral shearing interferometry (LSI) approach for investigating the metrology of a microelectromechanical systems (MEMS) device. (a) A scanning electron microscope image of the device. (b) Wrapped phase map of the MEMS, obtained from the original double exposure hologram. (c) A ‘shearogram’ of the device, in which the curvature of the object is superimposed on a linear term (the result of the LSI subtraction). (d) The MEMS shearing, without the linear term. (e) Profile of the MEMS phase along a central row of the phase map. (f) The resultant phase map of the MEMS. rad: Radians.

The surface roughness of MEMS can be an obstacle to the use of DH because it gives rise to unwanted coherent noise, which can negatively affect the measurement precision. However, the application of numerical filters can be useful in improving such hologram reconstructions. The hologram of a MEMS bridge, obtained with the use of square, Gaussian, and Butterworth8 digital filters is shown in Figure 2. In these holograms, the standard deviation of selected areas (σ) is used as a quantitative indicator of the filter. We find that the σ-reduction with the Butterworth filter brings a clear reduction of the noise with respect to the other two filters (i.e., a reduction of 38 and 16% compared with the square and Gaussian filters, respectively). 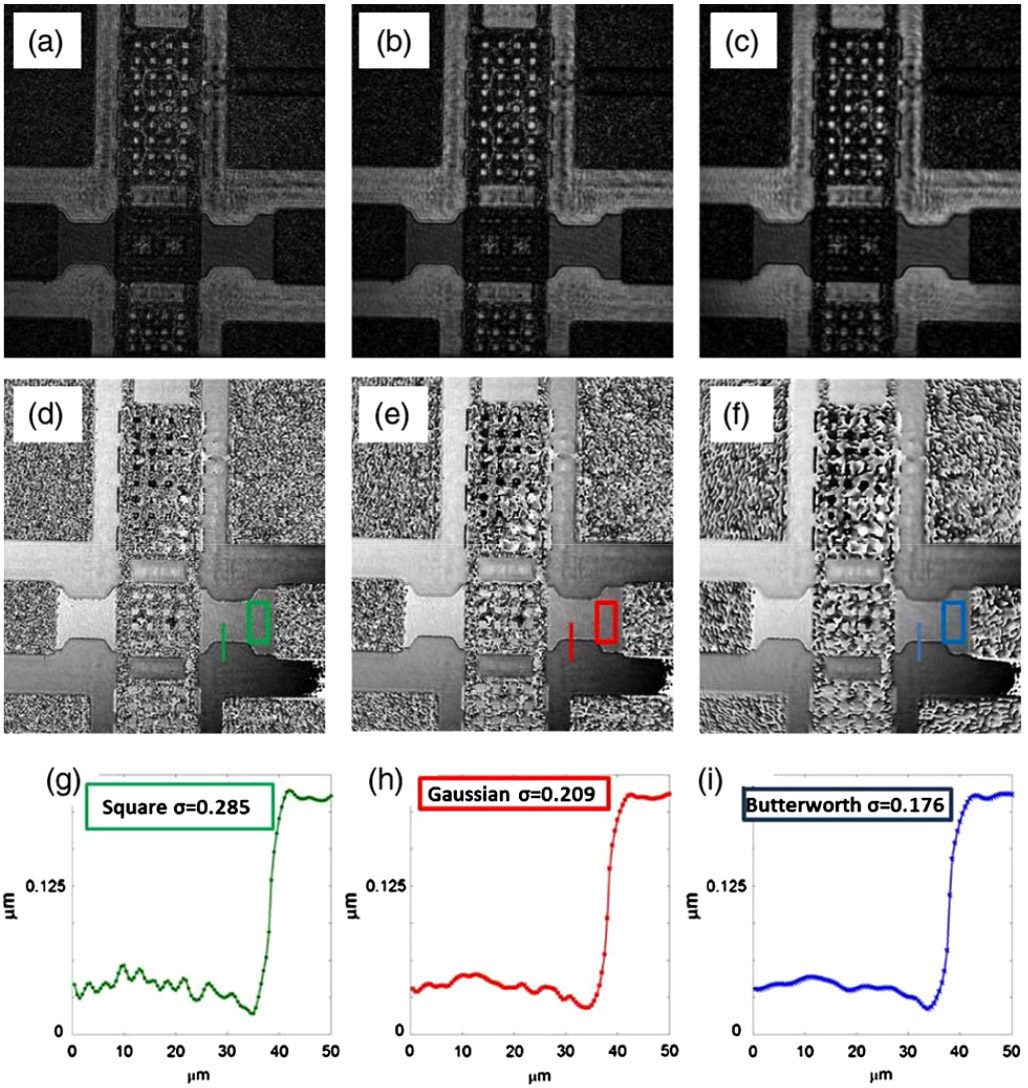 Figure 2. Reconstructed amplitude (top row) and wrapped phase (middle row) images of a MEMS bridge after square (left), Gaussian (middle), and Butterworth (right) filtering. The green, red, and blue boxes in (d) to (f) denote the areas used to evaluate the standard deviation (σ) in a flat region. (Bottom) Profiles along the colored lines shown in (d), (e), and (f).

In summary, we have presented some numerical tools that have been developed for digital holography and their application for characterization of MEMS devices. As the demand for 3D imaging continues to grow, these kinds of techniques will become increasingly important. In our ongoing work we will continue to develop new numerical tools and algorithms to characterize the novel MEMS materials. Further details about the work covered in this article can be found in our previously published review paper.9

Pietro Ferraro is a director of ISASI. He has published 12 book chapters, 200 papers, and is the author of more than 150 international conference papers. He has also edited two books and holds 14 patents. His main interests are holography, interferometry, microscopy, fabrication of nanostructures, ferroelectric crystals, optical sensors, and optofluidics. He is currently on the editorial board of Optics and Lasers in Engineering and is a topical editor of Optics Letters. He is a Fellow of SPIE and OSA.