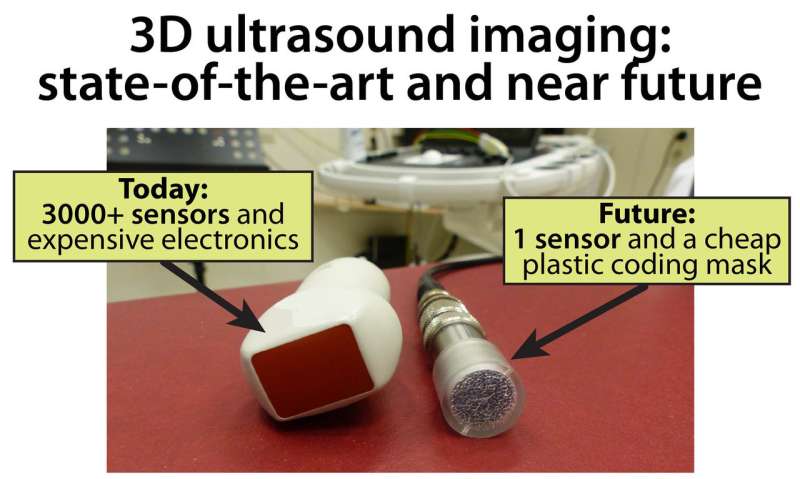 (Tech Xplore)—A team of researchers from Delft University of Technology and Erasmus Medical Center, both in the Netherlands, has found a way to perform 3-D ultrasound imaging using a single sensor instead of thousands. In their paper published on the open access site Science Advances, the group explains how their technique works and why they believe it could reduce the cost of ultrasound machines in the future.

As the researchers note, the traditional ultrasound machine is able to create imagery of the inside of the body by making use of transducers with hundreds or thousands of very small sensors—each sends a signal and then listens for the signal that is bounced back. Electronics inside the ultrasound device then stich the multiple images together to form a coherent view. But having to have so many sensors makes such machines very expensive. In this new effort, the researchers have adapted the traditional design in such a way as to allow for using a single larger sensor, which they believe will allow for making lower-cost ultrasound machines.

The new technique involved creating a disk with bumps on it of varying heights across its surface and then sending the sound waves through them. The difference in thickness modified the audio waves as they were sent through causing delays of different amounts. As the signals were bounced back and read by the sensor they were analyzed by a computer that took into account the delays introduced by the bumps on the disk. Rotating the mask helped to cover more area inside of the target improving image detail.

The team tested their device by creating imagery of 3-D letters they submerged in a tank of water. They report that it was able make out the letters and that it was also able to place them in a 3-D context within the tank. They readily acknowledge that their device is not yet ready for commercialization—mostly because of the cost of the computer needed to do the processing. But, they suggest further refinement could lead to devices that could be sold at low enough prices so that groups in third world countries could afford them.

Team focus is on ultrasound window into the human body

Three-dimensional ultrasound is a powerful imaging technique, but it requires thousands of sensors and complex hardware. Very recently, the discovery of compressive sensing has shown that the signal structure can be exploited to reduce the burden posed by traditional sensing requirements. In this spirit, we have designed a simple ultrasound imaging device that can perform three-dimensional imaging using just a single ultrasound sensor. Our device makes a compressed measurement of the spatial ultrasound field using a plastic aperture mask placed in front of the ultrasound sensor. The aperture mask ensures that every pixel in the image is uniquely identifiable in the compressed measurement. We demonstrate that this device can successfully image two structured objects placed in water. The need for just one sensor instead of thousands paves the way for cheaper, faster, simpler, and smaller sensing devices and possible new clinical applications.

This document is subject to copyright. Apart from any fair dealing for the purpose of private study or research, no
part may be reproduced without the written permission. The content is provided for information purposes only.