Researchers from the University of Stuttgart used a 3D-printing process called two-photon lithography to make highly precise lenses that are just a few micrometers in size and that reduce chromatic aberrations. The miniature lenses could be used in small cameras and endoscopes to correct color distortion during imaging.

Two-photon lithography uses a focused laser beam to polymerize a liquid light-sensitive material known as photoresist. Two-photon absorption allows the photoresist to be polymerized in cubic micrometer volumes, which enables fabrication of complex optical structures on the micrometer scale. The Stuttgart team has been investigating micro-optics made with two-photon lithography for the past 10 years.

Researchers used 3D printing to make highly precise and complex apochromatic miniature lenses that can be used to correct color distortion during imaging. Courtesy of Michael Schmid, University of Stuttgart.

“We noticed that color errors known as chromatic aberrations were present in some of the images created with our micro-optics, so we set out to design 3D-printed lenses with improved optical performance to reduce these errors,” researcher Michael Schmid said.

The way that light refracts when it enters a lens depends on its wavelength. Without correction, red light, for example, will refract to a different spot than blue light, causing fringes or color seams — chromatic aberrations — to appear in images.

The researchers designed miniature versions of the lenses traditionally used to correct for these chromatic aberrations. They began with an achromatic lens, which combines refractive and diffractive components to limit the effects of chromatic aberration by bringing two wavelengths into focus on the same plane. They used a commercially available two-photon lithography instrument made by Nanoscribe GmbH to add a diffractive surface to a printed smooth refractive lens in one step. 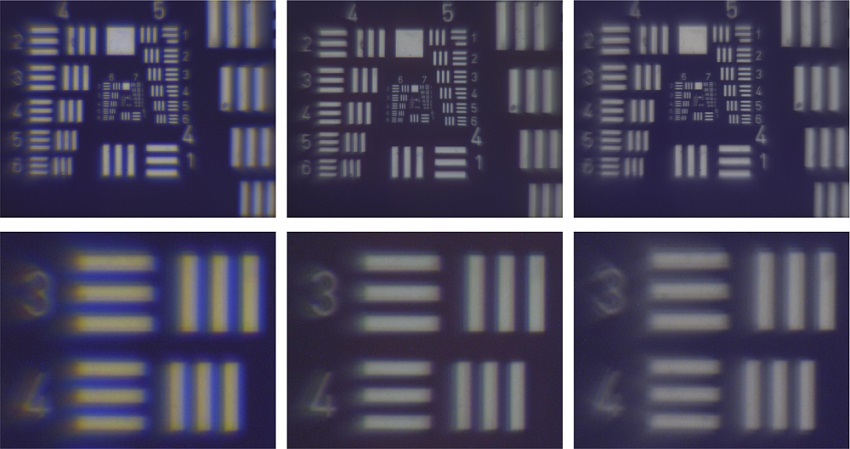 In tests of the new lenses, the reference lens (left) shows color seams due to chromatic aberrations. The 3D-printed achromat lenses (middle) reduced these drastically while images taken with the apochromat (right) completely eliminated the color distortion. Courtesy of Michael Schmid, University of Stuttgart.

“Our test results showed that the performance of 3D-printed micro-optics can be improved and that two-photon lithography can be used to combine refractive and diffractive surfaces as well as different photoresists,” Schmid said.

As the technology evolves, the researchers believe that fabrication time will become faster, making their approach to printing apochromatic microlenses more practical. It currently can take several hours to create one micro-optical element, depending on size. While the 3D-printing technology continues to mature, the researchers are working to create new lens designs for different applications.

“3D printing of micro-optics has improved drastically over the past few years and offers a design freedom not available from other methods,” Schmid said. “Our optimized approach for 3D-printing complex micro-optics opens many possibilities for creating new and innovative optical designs that can benefit many research fields and applications.”

The 3D-printed microlenses could be used in a variety of applications. “The ability to 3D-print complex micro-optics means that they can be fabricated directly onto many different surfaces such as the CCD or CMOS chips used in digital cameras,” Schmid said. “The micro-optics can also be printed on the end of optical fibers to create very small medical endoscopes with excellent imaging quality.”

The work was led by professor Harald Giessen, director of the Institute of Physics (4th) at the University of Stuttgart. The research appeared in Optics Letters (www.doi.org/10.1364/OL.423196), a publication of The Optical Society (OSA).